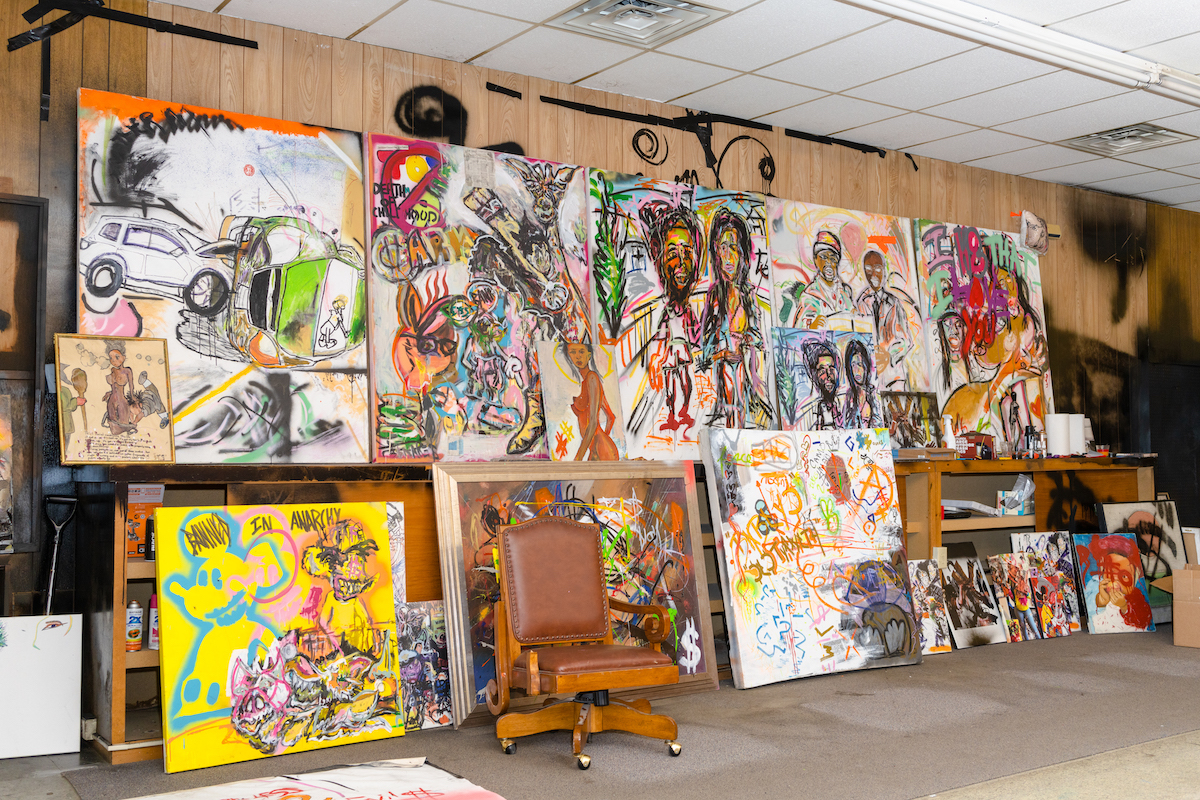 A major lure of Buffalo hip-hop lies in its audacious imagery. The Queen City’s brand of rap music is rooted in artistic expression without boundaries — whether it’s reimagining Caravaggio’s David With the Head of Goliath (1601) with flashy chains or performing live wearing Nicolas Cage masks — and so far it’s been successful. In the last few years, longtime street rap trio and label conglomerate Griselda has broken into the mainstream music industry, a handful of regional acts have signed major record deals, and a growing community of local fans and promising talent is embracing the once overlooked hip-hop movement here. But who started this phenomenon of integrating rap music with eccentric imagery in Buffalo? And who is keeping it going?

For visual artists $eeing Sounds and DNTWATCHTV, the introduction of hip-hop collective F1rst Class in 2012 was a major turning point in bringing about the unique symbiotic relationship between rap music and visual art in Buffalo. Consisting of now-prominent artists like rapper Jae Skeese and producer Mitch Arizona, the six-piece music group had a distinct aesthetic that contextualized local rap music in a fresh way. Whether it was Skeese sporting exclusive sneakers or rapper Billie Essco mixing thrifted apparel with designer pieces, F1rst Class stretched the boundaries of what local rappers looked and sounded like at the time. To a certain extent, they built on the high art lifestyle pioneered by artists like Kanye West, Pharrell, and Kid Cudi in their music, which in turn had a significant impact on their listeners.

“I’m extremely proud of the art scene, the art community, the talent. I think we’ve been fighting hard the last couple years for diverse opportunities and to show that we deserve to be seen on the world stage...but I’m proud of everybody working together.” —$eeing Sounds.

$eeing Sounds, aka Byron Brown II (and controversially the son and namesake of Buffalo’s mayor), views his early affiliation with F1rst Class as an integral part of advancing visual art’s role in the local hip-hop scene. Working alongside the hip-hop collective, he eventually became creative director of F1rst Class’s early fashion line, The Clinton Era. People across the city wore the clothes, and its popularity propelled $eeing Sounds’s reputation as a visual artist. As a highly requested collaborator, $eeing Sounds provided creative consulting specifically for rappers and their artistic endeavors. One of his most popular contributions is the hand-painted “187” logo on hoodies and jackets designed to promote rapper Westside Gunn’s Hitler Wears Hermes album series. “That was kind of the start of everybody wearing my art and not knowing it,” he explained. 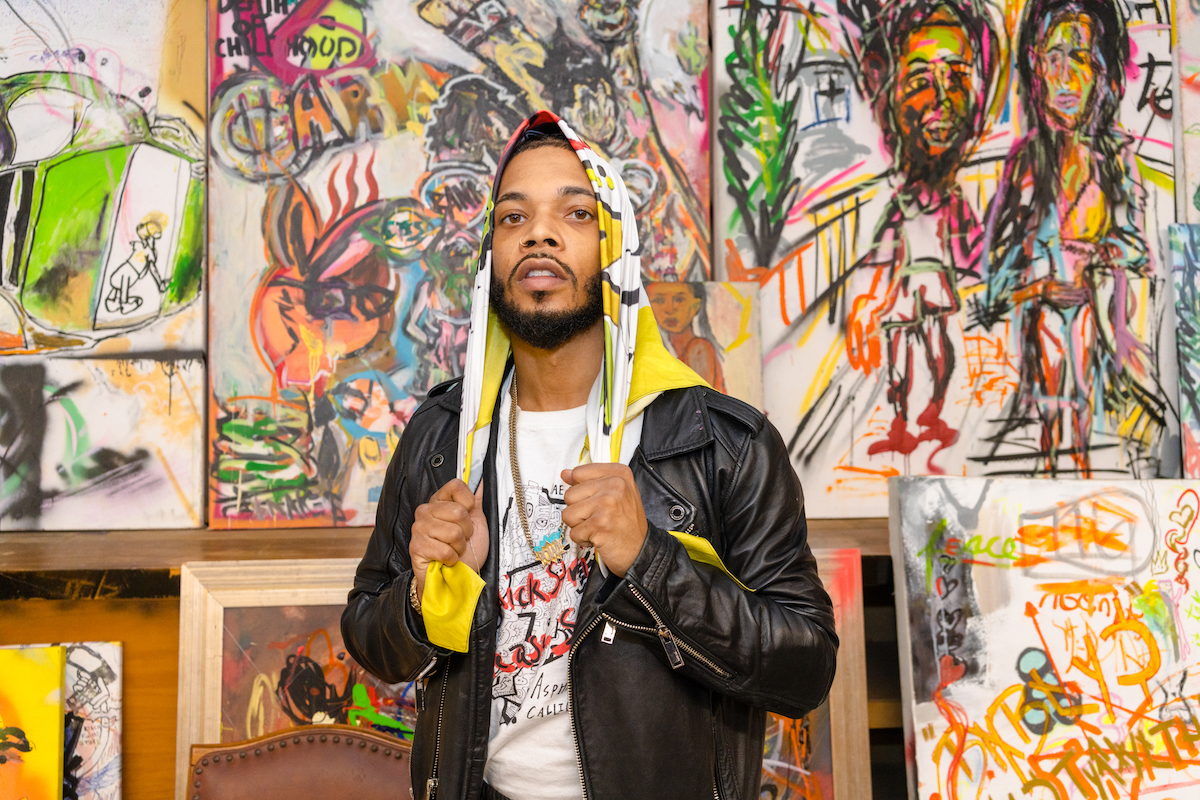 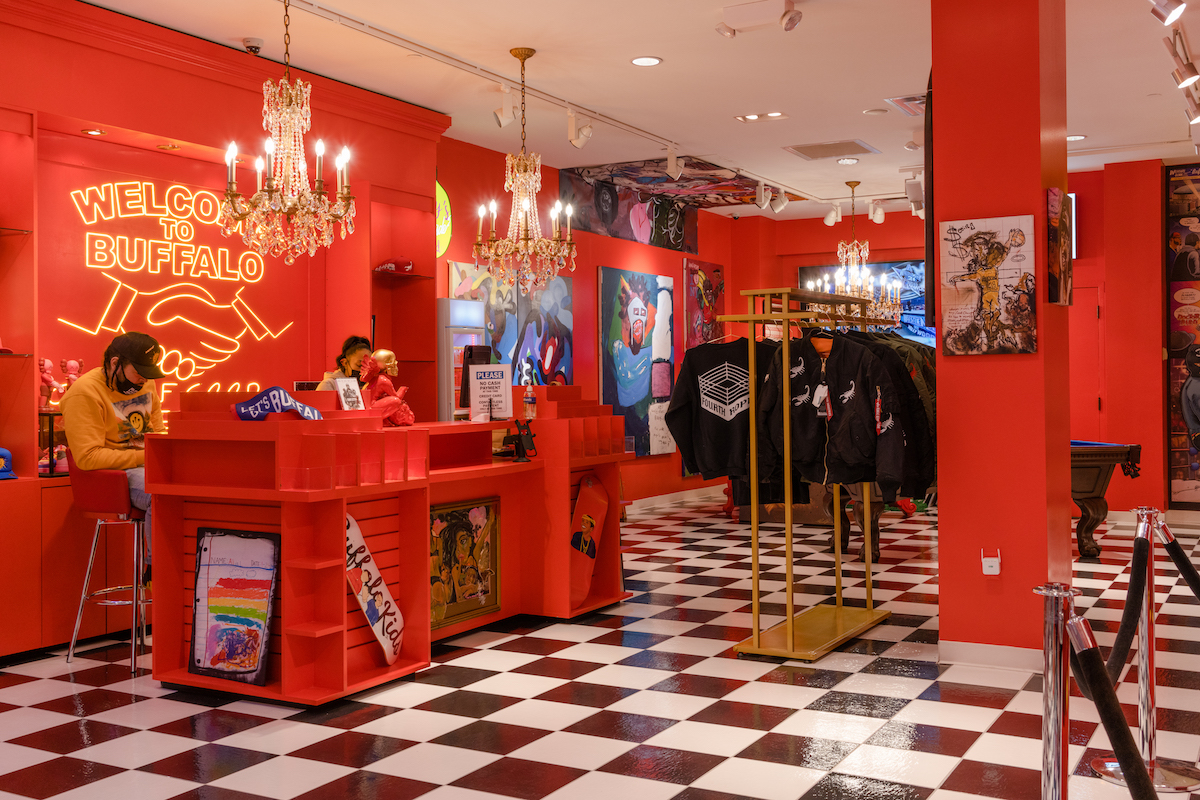 Since his efforts with Gunn, $eeing Sounds has continued to be an instrumental force in creating unique imagery for the hip-hop community. Featured in clothing lines, album covers, and films, $eeing Sounds’s paintings on canvas have become the most influential part of his output in recent years. Many of these combine animated cartoon characters from his youth with emblems commonly associated with rap music, like dollar signs, third eyes, and flames, against strikingly bright palettes, blurring the line between abstract expression, personal memory, and cultural appropriation. $eeing Sounds’s credibility stems from the fact that he elevates themes and images deeply rooted in both hip-hop and local street culture: his work has been featured at the historic Statler building, twice.  Maintaining his originality and leveraging accessibility through his art, $eeing Sounds has inspired a new generation of onlookers and an established generation of artists to expand their horizons.

“I’m just doing stuff the way I like. The shit happened by mistake honestly. A lot of the greatest things happened in my life by mistake to be honest, and I’ve just been in the moment enough to appreciate it and go with it.” —DNTWATCHTV

Cue vibrant, genre-bending emcee Truey V, now based in New York City and selling his art to some of hip-hop’s most popular rappers. Introduced to Buffalo’s hip-hop scene in 2011, Truey initially watched the emergence of F1rst Class and another local rap group, Koolie High, from the sidelines, and started making music in 2013. The artist was inspired by F1rst Class to create his own rap group, the short-lived Real Estate Monopoly. “Everybody already had their own collectives,” he explained. “A lot of things were established, and I was kind of a newcomer to the shit around that time. . . . So I just started some shit with my friends.”

Truey moved to the West Side of Buffalo, center of the city’s hip-hop scene, early in his career. Eager to make his mark and continue interacting with the community at a time when it was slowing down, the artist was involved in several initiatives to elevate and bring industry attention to rap music in Buffalo, including 2015’s Anti-Venue Tour pop-up concerts and the annual Vibrations Music Festival and Conference inaugurated in 2017. It was around this time that he began painting and gained the attention of major label Republic Records.

Truey moved to New York City to pursue his music in 2018. While expanding his profile as a rapper and reinventing himself as DNTWATCHTV (i.e. “Don’t Watch Truey V”), he continued to focus on his visual art. DNTWATCHTV eventually connected and built a collaborative partnership with Hidjifilms, a Buffalo native and creative director for A$AP Rocky, that brought him attention from creatives and rappers alike.

Painting on everything from sidewalks and trains to wood and paper, DNTWATCHTV highlights bright colors in overlapping obtuse shapes. His work makes a brief appearance in a short film by AWGE (A$AP Rocky’s creative agency) that debuted on VFILES and most recently in the new Buffalo Kids store in the Walden Galleria mall; last year, he also served as the creative director for local rapper Armani Caesar’s music video “Simply Done.” DNTWATCHTV’s position as a major propagator for the hip-hop scene has cemented his influence as a visual artist.

“The painting really came out of full circle shit. I was already painting when I started living by myself, I didn’t just want to be doing one thing and like overfocused on one thing” —DNTWATCHTV 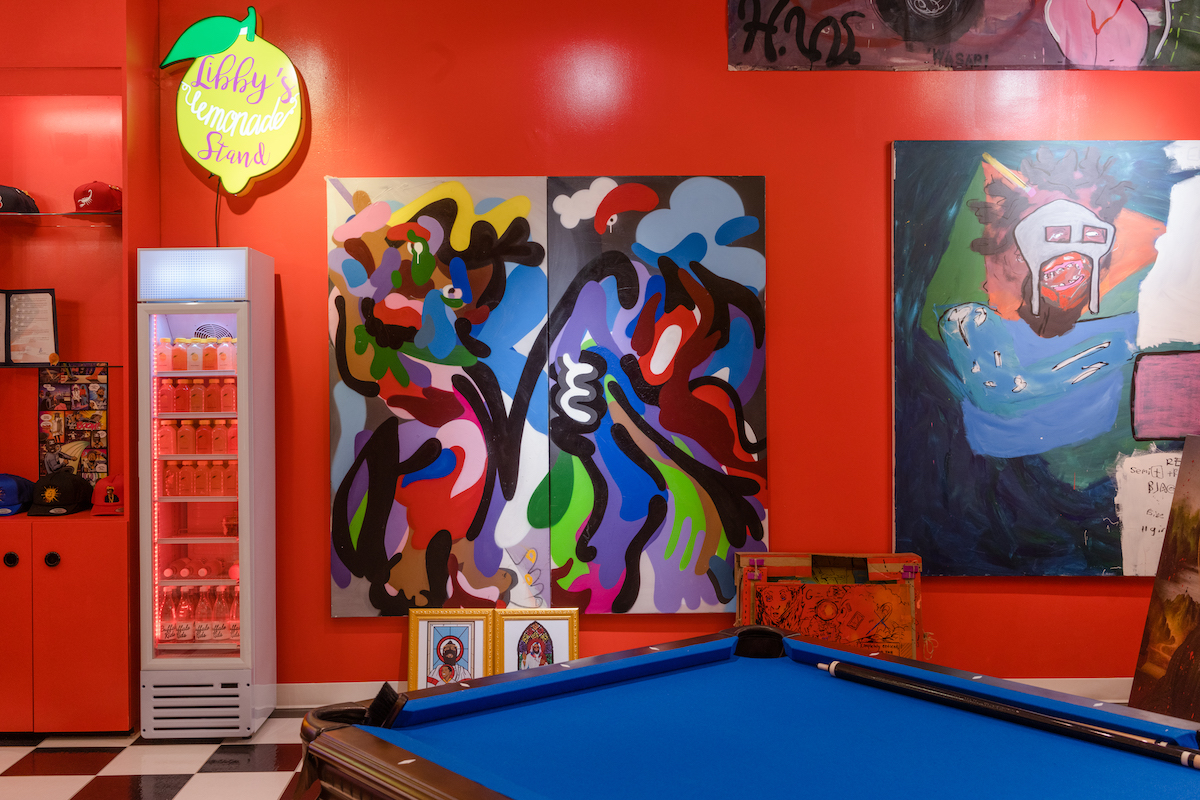 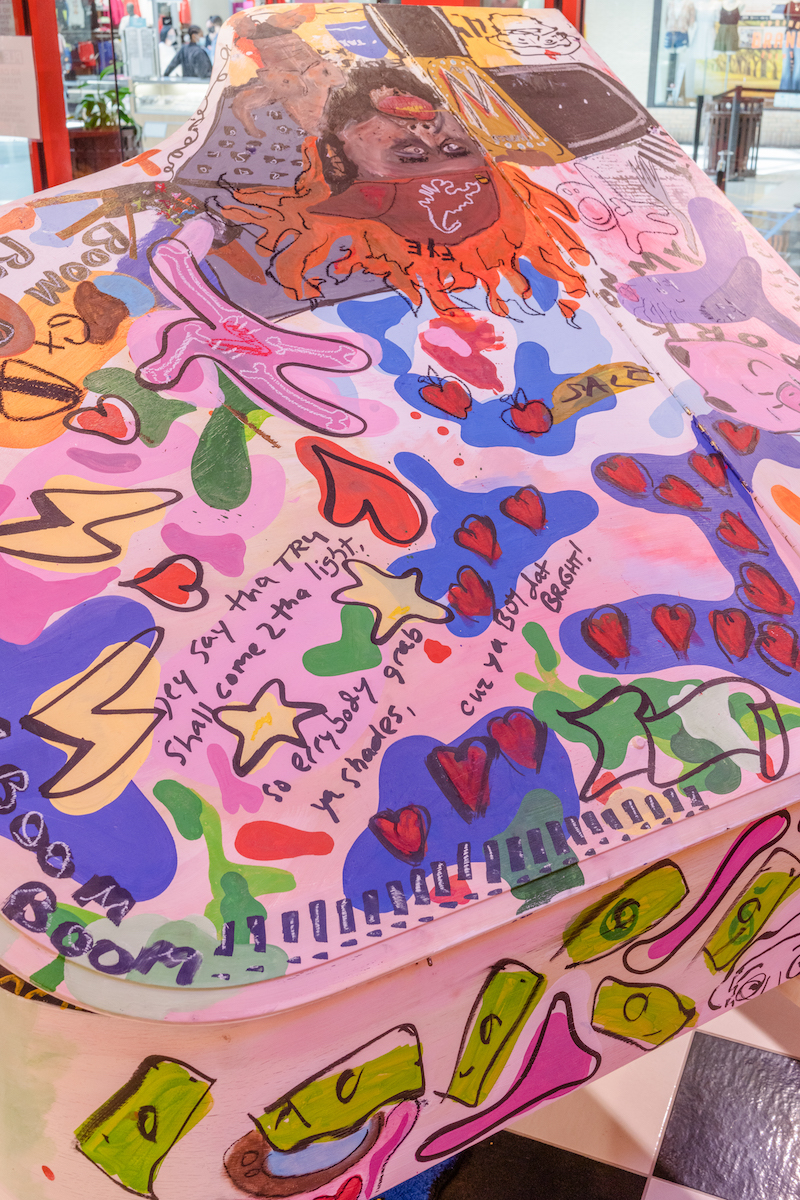 Similar to $eeing Sounds, DNTWATCHTV’s growing reputation in Buffalo has enriched the hip-hop community’s sense of pride. In a short time, what was once a fickle, underserved part of the city’s musical arts ecosystem has become a thriving, diverse community of rappers, singers, and producers who embrace a project’s visual execution as much as its sonic integrity — the opening of Buffalo Kids is physical evidence of that (both $eeing Sounds and DNTWATCHTV are featured in the flagship art gallery space). Created by Griselda éminence grise Westside Gunn, the store has grabbed the attention of the local and national hip-hop communities and represents a huge step forward in honoring Buffalo’s own. As the relationship between visual artistry and hip-hop continues to grow in Buffalo, both $eeing Sounds and DNTWATCHTV are invested in the continuous unity and experimentation that has kept the subculture thriving and will hopefully bring about even more opportunities for emerging local artists in the future.

Schondra Aytch is a freelance writer and music blogger from Buffalo, NY. She runs hip-hop and r&b blog Sneakvibing.com.