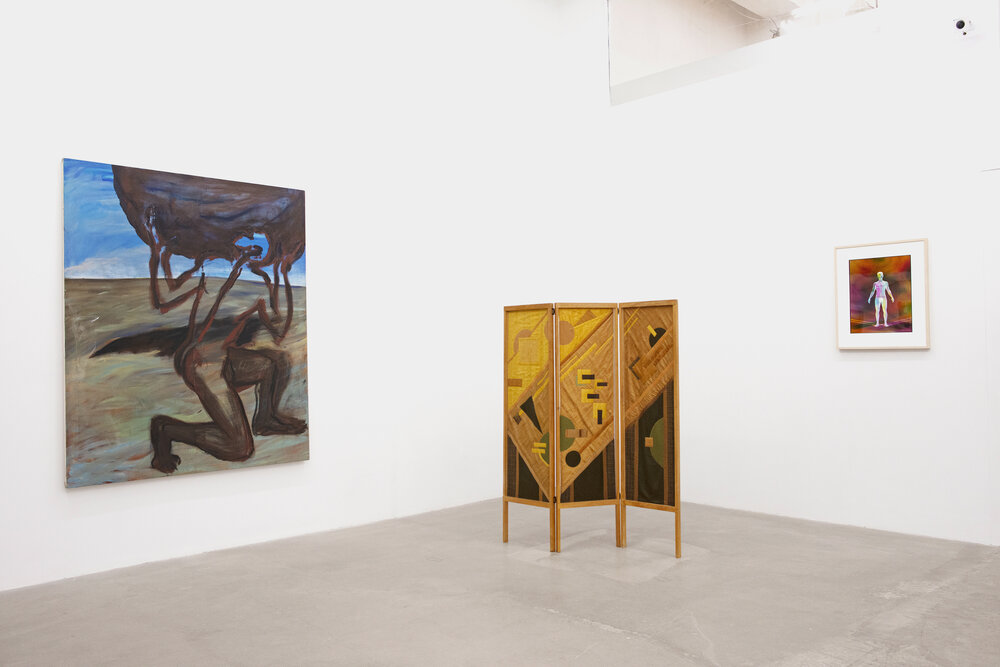 There are more than four, Installation view at Cooper Cole Gallery, 2020. Courtesy of Cooper Cole, Toronto.

A few years ago in Toronto, I was taking the 501 Queen streetcar home from work. My friend Emily and I hopped on to the packed car at Spadina Avenue — an anxiety inducing thought in today’s new viral moment. We managed to squeeze through a sea of shoulders toward the very back where I could see two empty seats. At this time Toronto Transit Commission (TTC) streetcars terminated in a semicircle of seven facing seats. This was one of Toronto’s great public social spaces.

After sitting down, Emily and I continued a conversation about a book I was reading — Gilles Deleuze’s Bergsonism (1966). Deleuze’s (and Félix Guattari’s) notion of the rhizome has influenced my appreciation for the complexity of social networks and how they defy dualist notions of hierarchy. Bergsonism is Deleuze’s attempt at explaining the importance of Henri Bergson’s notions of multiplicity (among other things) to the construction of rhizomatic thinking. A rhizome has no beginning and no end; it resists the linear causality of a hierarchical tree-like conception of knowledge and instead embraces entropic propagation and nomadic growth. Rhizomatic thinking suggests that a social analysis should focus on the interrelation between all nodes of a network rather than a narrative succession of plot points.

Between exchanges with Emily a voice from across the semicircular lounge said, “That’s a great book.” I looked up, slightly bemused, to see Jacob Korczynski. Sometimes when in large crowds it feels like no one can see or hear me; as if I am ensconced within some force field–like bubble of collective anonymity. I was peripherally aware of Korczynski as a fellow participant in a reading group organized in conjunction with the exhibition Chroma Lives (2016), a reimagining of 1983’s iconic exhibition Chromaliving: New Designs for Living. It seems fitting that this exchange happened on the TTC, one of Toronto’s main modes of communication, moving people to and from different nodes of the sprawling urban network. At the time Korczynski’s comment didn’t generate much more than a brief affirmative response and a quick succession of smiles; however, looking back with hindsight, I can’t help but think that the ideas present within Deleuze’s Bergsonism establish a shared affinity and more nuanced reading of Korczynski’s curatorial practice.

There are more than Four was a group exhibition that took place at Cooper Cole between April 11 and May 30, 2020. Guest curated by Korczynski, the exhibition featured works by Andy Fabo, Robert Flack, Tim Jocelyn, and Chrysanne Stathacos. The title of the exhibition performs an important linguistic preface for visitors before they set foot in the gallery. “More than four” signals that these four artists share a common bond, but one that includes many other voices. It establishes that this exhibition is focused on community and the role that community has in artistic production. Indeed, Korczynski begins his curatorial statement by writing, “for me, life in this city begins and ends with artist-initiated networks, where energies and programmes are constantly opening and ending.”[1] Here we see the rhizome begin to unfold.

Korczynski goes on to explain that the impetus for the exhibition was “anchored upon the long-term friendship and dialogue between Andy Fabo and Chrysanne Stathacos, and expanded to incorporate the work of two artists who are no longer with us due to the ongoing epidemic of AIDS: Andy’s lover Tim Jocelyn (1952–1986) and Chrysanne’s close friend Robert Flack (1957–1993).”[2] Exhibitions based around  artistic communities are typically organized in institutional settings where the exhibited works are frozen in time, rendered lifeless by historicity. However, by using an unfolding array of relationships as the basis for this exhibition, Korczynski retains the spirit of relation between the artists and as a result creates what he calls a “doubled portrait, like catching your own gaze on a reflective surface in close proximity to another.”[3]

Korczynski’s double image reminds me of the Deleuzian (via Bergson) notion of the actual and the virtual. Like an invisible cloud of meaning surrounding an artwork, the virtual represents the potential that can arise through the social activation of an object. In other words, for Fabo and Stathacos the idealized meaning of Jocelyn’s and Flack’s works does not come from the materiality of the objects installed in the gallery but rather through their shared history and social connection. 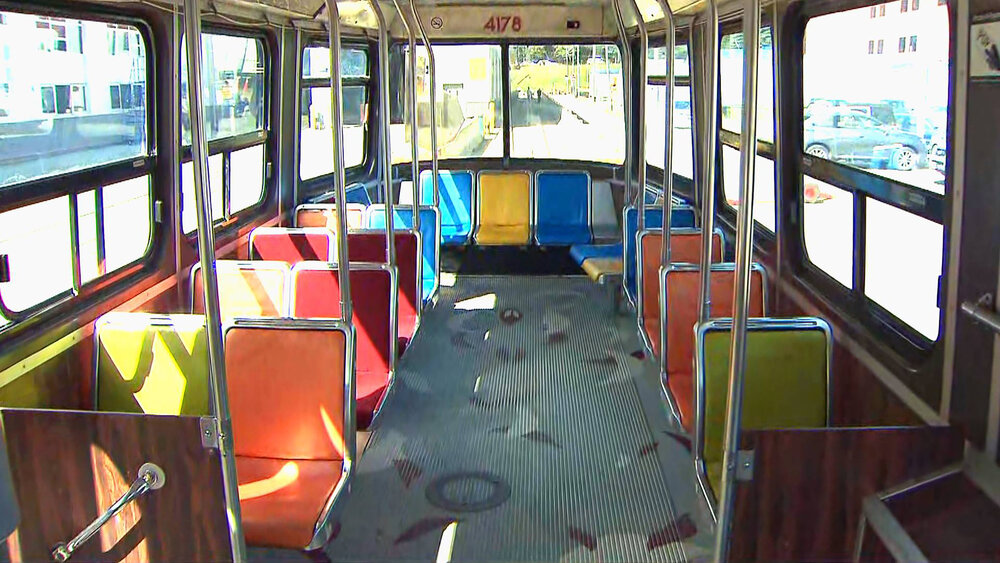 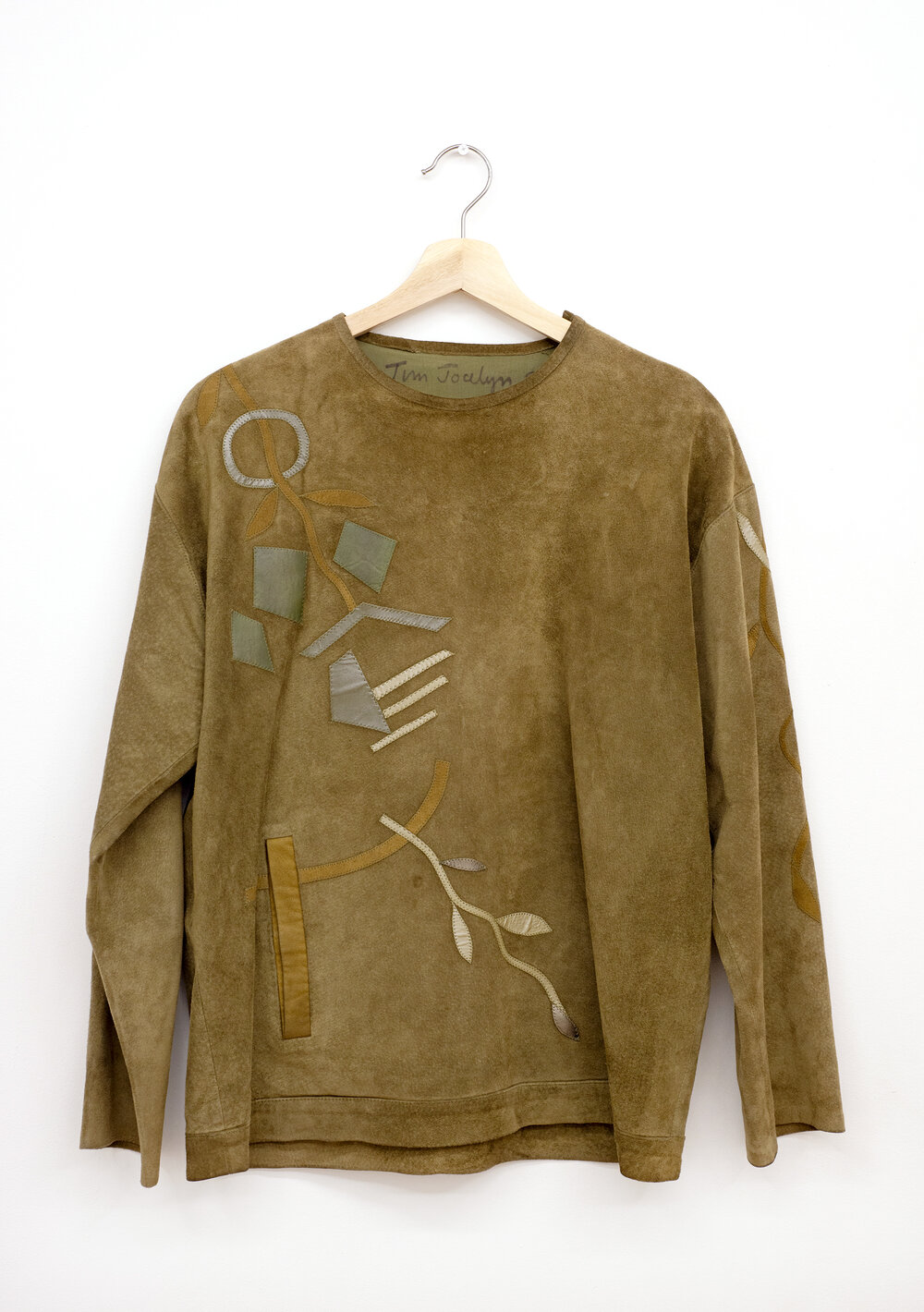 Andy Fabo leads the viewer into a mythological virtual realm with a large-scale oil painting titled Sisyphus on the Plains (1988). The haste and roughness of the brushstrokes at first felt emblematic of the titular character’s eternal struggle; however, having learned that this work was made following Jocelyn’s death, the paint application begins to suggest Fabo’s grief. Korczynski points out that, in contrast to classical depictions of Sisyphus, Fabo’s Sisyphus is turning and looking up toward the giant boulder he bears,  perhaps suggesting that although grief and loss are burdens, they are ones he plans to face head on. Fabo’s Sisyphus is also a transparent figure; in the painting, the ground plane and sky become intertwined with the body. This aesthetic choice communicates that materiality (or lack thereof) does not dictate presence or absence. This makes me think back to the title of the exhibition and how important the present tense is — “there are more than four” as opposed to “there were more than four” — forefronting the immaterial and ephemeral connections within the exhibition space.

Silverado (2001), a series of quick and intuitive ink on silver card drawings, engages with transparency, memory, medium, and viscosity. These drawings, installed in two separate but proximate grids, feel like a flash of memory that Fabo was compelled to record before he forgot. The subject matter ranges from images of death, the male body, still lives, and, repeatedly, a hose spraying into water. Assessing each image and then looking at the series as a whole, a vocabulary emerges, a point of view, a life lived. The unpredictable viscosity of the medium itself — as Korczynski writes, “pooled or bubbled ink comes together to form moments of fluidity, at times contained, and at others nearly sliding off the surface” — lends to the affect of memory and experience..[4] Fabo’s The Wild Ones (1975) exhibits a similar type of material masquerade. At first glance it appears as a painterly abstraction but upon closer examination reveals itself as an assemblage of acrylic, velvet, leather, and metal studs with an obscured collage of a troika at its centre.

Like Fabo’s The Wild Ones, Tim Jocelyn’s textile works take everyday material as artistic medium. Three works are installed throughout the gallery, one on each level of the exhibition space, creating a subtle but powerful distribution of Jocelyn’s work (and presence) throughout the entire exhibition. Korczynski makes an important distinction in stating that Jocelyn’s “work was not so much medium-specific as it was subject specific: textiles always suggest bodies, either present or absent.”[5] For me this changes the nature of Jocelyn’s work entirely. Within a commercial gallery context, these works might initially read as purchasable aesthetic garments; however, they take on significant weight and meaning when recontextualized as vessels that carry the corporeal resonance of both their maker and model. The Gordon's screen (1980–81) not only beautifully divides space but also suggests the presence of another just out of view. This work in particular was not for sale, an explicit gesture that resists its commercial context. The aesthetics of Gordon's suede shirt (1982) and Rainbow Skyline jacket (undated) appear so distinct it is almost hard to imagine they came from the same artist. What connects these works is  the implied relationship Jocelyn had to their intended owners. Aesthetic choice then becomes dictated by personal connection and care rather than trends of a particular moment.

Robert Flack’s transcendental photographs represent a juncture in the artist’s practice and life. Made between 1990 and 1992, the three photographs installed throughout the gallery were all produced after Flack learned of his AIDS diagnosis. Here, Flack was able to explore the body as a projection through emerging imaging techniques, in particular, digital photography. Installed next to Fabo’s Sisyphus, Flack’s Etheric Double (1990) presents a body in a type of suspended animation. One can imagine the difficulty in knowing your body is going through immense and irrevocable change without any outward signs. Flack questions where the essence of the self is located; within the spirit or within the body. The radiant auras of the background pulse forward, reducing the body to a near silhouette and inverting the traditional hierarchy of the image. For Korczynski this compositional gesture “suspends the figure between legibility and ephemerality, between the radiance of life and the threat of death.”[6]

In harmony with Flack, Chrysanne Stathacos’s large-scale installation 1-900 MIRROR MIRROR (1993–ongoing) questions the positionality, vulnerability, and materiality of the body through the lens of the ongoing AIDS crisis. Stathacos constructed the work as a kind of infinity chamber — a mirrored phone booth covered in printed roses, ivy, and hair — to see how people would react when confronted with their own image.  1-900 MIRROR MIRROR welcomes viewers to sit in the booth and converse with a virtual Stathacos in the role of a fortune-teller / future seer.  The artist uses the superimposition of her own virtual image and voice in combination with the reflection of the viewer to destabilize the viewer’s internal self-image long enough that “hope and healing might transpire.”[7]

In many ways, Mirror feels illustrative of the artist-initiated networks that Korczynski refers to at the outset of his essay. The printed imagery on the booth’s surface begins to feel like an ongoing accumulation, or trace, of people in relation. Acting as both a window and a mirror, the work is most compelling when it becomes a conduit in service of the network rather than aesthetics. In many ways Stathacos correctly predicted the future of screen-based communication, how we now “look towards the reflective surfaces of our screens not only to see one another, but also ourselves.”[8] Korczynski ends his curatorial essay with a date: March 12, 2020, right at the moment the entire world was going into lockdown in an attempt to slow the spread of COVID-19. This radically shifts not only the prescience of Stathacos’s interactive work but also the context for the entire exhibition. 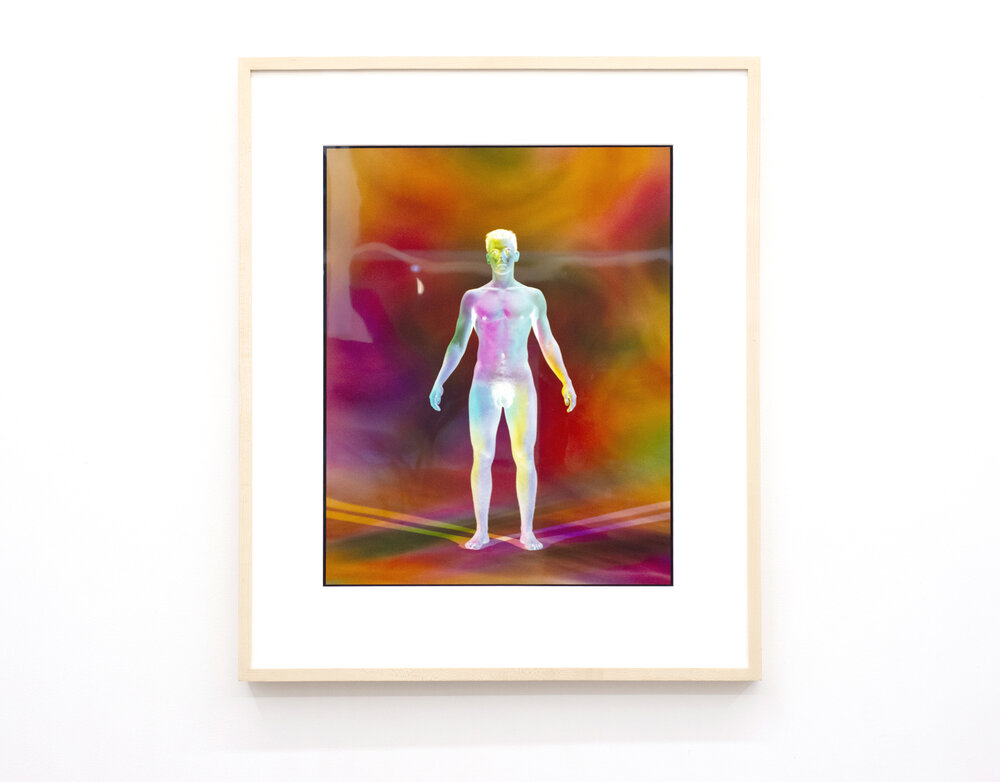 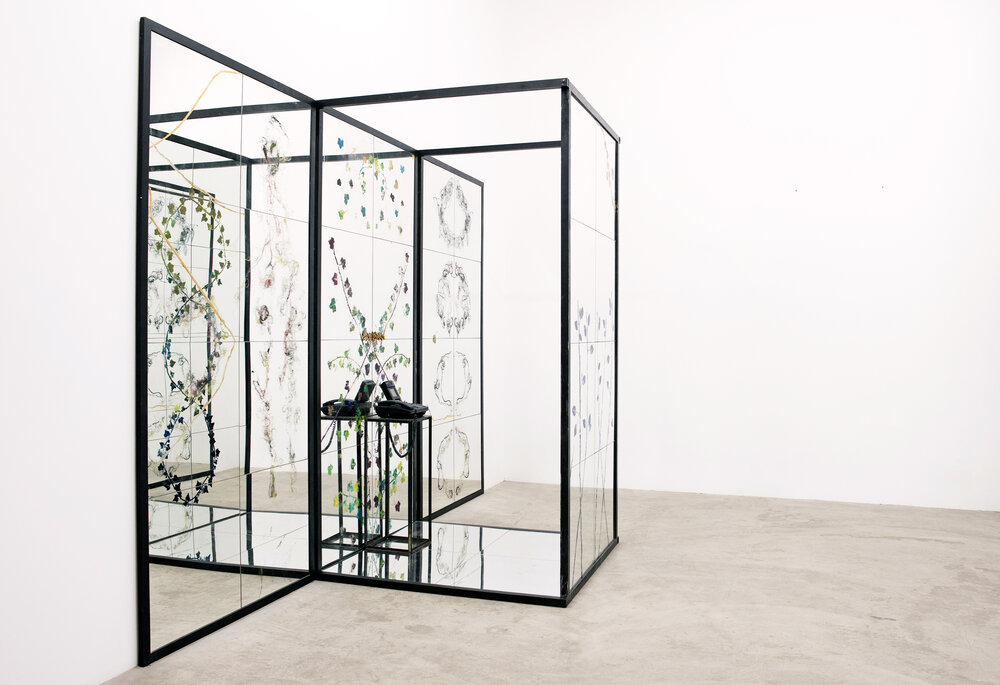 Shifting notions of health, embodiment, and presence and absence within artist networks are the basis for There are more than Four. The exhibiting artists’ works are united through and brought together by their shared experience with the AIDS epidemic. Radical reassessment and reevaluation, but also personal connection and togetherness, emerge in the face of loss. Returning to Korczynski’s doubled portrait, this exhibition becomes a mirror for the moment in which we currently find ourselves. Fabo, Jocelyn, Flack, and Stathacos present works that articulate the ephemeral conditions of meaning that activate objects and strengthen networks.

At the end of  2019, the last of the CLRV/ALRV fleet of TTC streetcars was officially retired; which means so too goes the semicircular lounge. The new streetcar models instead favor forward or backward–facing seating— a commitment to linearity. I wonder how chance encounters such as that between me and Korczynski will happen now in such a socially distant time. The urban rhizome and artist networks will continue to propagate in the face of this new virus, but we have yet to discover the strategies to nurture them.

Parker Kay is an artist and writer living in Toronto. He is also sometimes known as Pumice Raft.