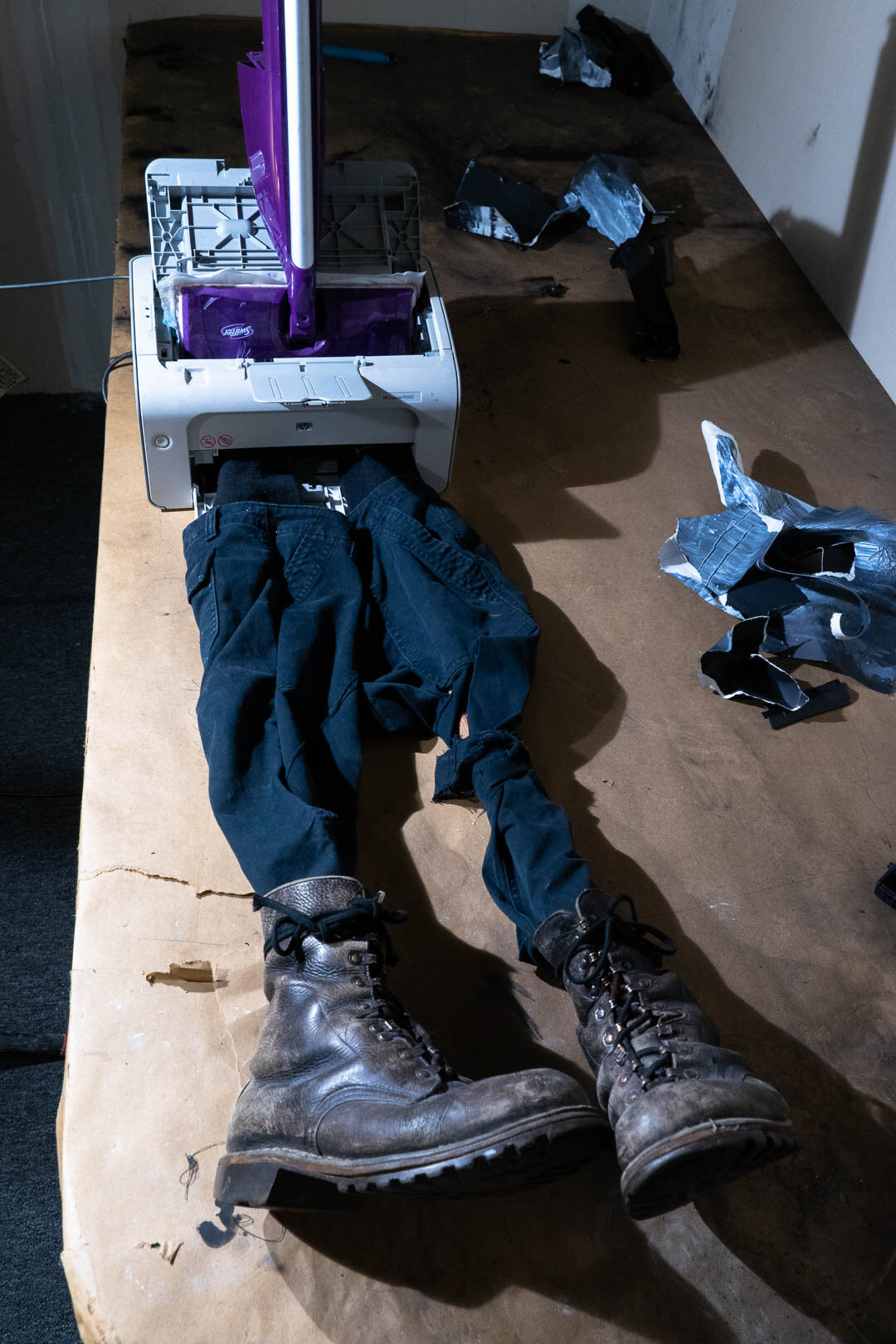 One of the things that makes this impoverished present unbearable is our inability to imagine a better future. When life feels unsustainable it becomes harder and harder to invest in an intangible future: To what can we pin our hope while in an ineffable present? For me, this has led to a renewed interest in and research of utopia. Alongside this personal, critical renewal, I have witnessed an artistic one, as more local artists, especially Queer-identifying individuals, have attempted to conjure contingent, liminal, but ultimately utopic spaces through their work.

In José Esteban Muñoz’s 2009 book, Cruising Utopia: The Then and There of Queer Futurity, the author contends that queerness, like utopia, is always on the horizon, forever imminent yet never arriving. Muñoz argues that utopia and queerness are linked through this shared sense of existential imminence, of potentiality, and of adaptive indeterminacy in pursuit of something chameleon-esque always beyond our grasp. The pursuit and failure of utopia playing out over and over again brings to mind Lucy’s luring of Charlie Brown into kicking at the football, always promising she won’t pull it away and leave him flat on the ground and never not failing to live up to her word.

Within our chaotic present, the ability to thrive in liminality — that is, in ambiguity, in the interstices between two spaces or two superimposed states — is a potent tool in the hands of those pursuing utopia. It has been a century since an event comparable to the current pandemic has captured our collective psyche, but the perceived danger of bodies with viruses ripping through them also echoes the darkest years of the HIV/AIDS crisis. This is not to say that HIV/AIDS and COVID-19 are remotely similar in scale or horror, but governmental negligence and disavowal of responsibility resonates across both events. Generationally, queer people have passed closer to a mass-fatality health event than the public writ large, and because of this there is a particularly sharp queer kinship with liminality and indeterminacy — made up of the in-between spaces of one’s own life or community, or of waking in a revoked tomorrow.

What has emerged for queer people in my community, I would argue, is a compelling strain of site-specific Queer installation art. This artwork speaks to our moment of bodily crisis and, through a witch's brew of queerness and indeterminacy, fashions two separate, liminal spaces. I would also contend that this Queer liminal space — a space exemplified in the work of contemporary artists such as Cassils and Brendan Fernandes, and partially indebted to Feminist performance art from the 1970s — is distinct from that created by other performance or time-based visual art. In two prominent examples taking place locally during the fall of 2020, Queer liminal space is born from the crevices between nature and humans and from the chasm between humans and their filth. Queer liminal spaces emerge from the fault lines of the everyday.

The first experience, Jamie Currie’s Just Here (2020), took place in a decommissioned fire station on Buffalo’s West Side, between a slice of dense residential lots and the thrum of construction. Social distancing guidelines thwarted a formal opening; instead appointments were made with the artist, an Associate Professor in the Department of Music at the University at Buffalo, for viewing. Here the interrelatedness of the artist and artwork is formalized: one couldn’t be seen without the other.

Just Here sprawls across a darkened box of a studio-cum-gallery within the old fire station’s core. At first glance it is a ransacked office, dimly lit and spoiled with rubbish, as if the last tenant’s venture suddenly collapsed and they decamped moments later. Picking through the bureaucratic gloom, it becomes clear that these are not office artifacts but personal effects: clothes, jockstraps, spilled talc powder, a raft of Amazon package wrap, disemboweled suitcases with crumpled paper spilling out, adolescent smears of paint dotting a course between wall and ceiling, and a severed tree limb glowering in a darkened corner. Part Goodwill rubbish bin and part serial killer stalking ground, who’s utopia could this possibly be?

The room and its disquieting contents have an anthropological mystique. Just Here is assembled from the artist’s own detritus, taken from a former apartment and trekked across the city. Acting first as Currie’s studio space during the nascent weeks of the statewide lockdown to curb COVID-19, it became a locus of angst within which the artist repurposed remnants from his life into an immersive installation that holds equal space for reverence and disgust. In fact, it is this abject pull toward one’s own leavings and trash that fascinates Currie. 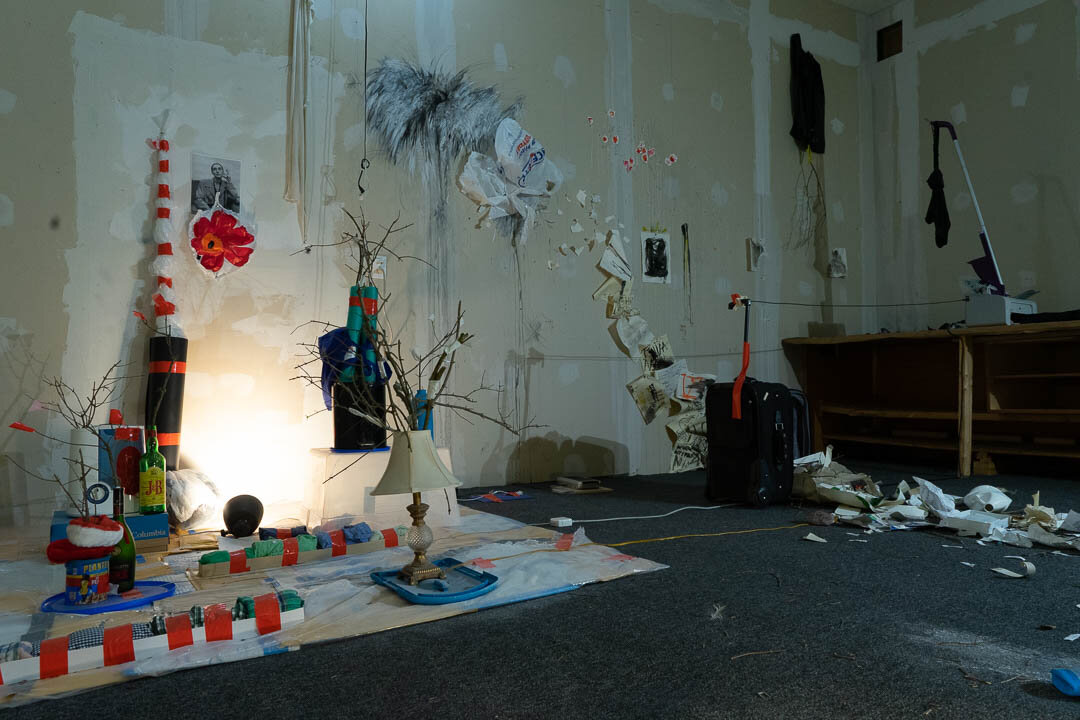 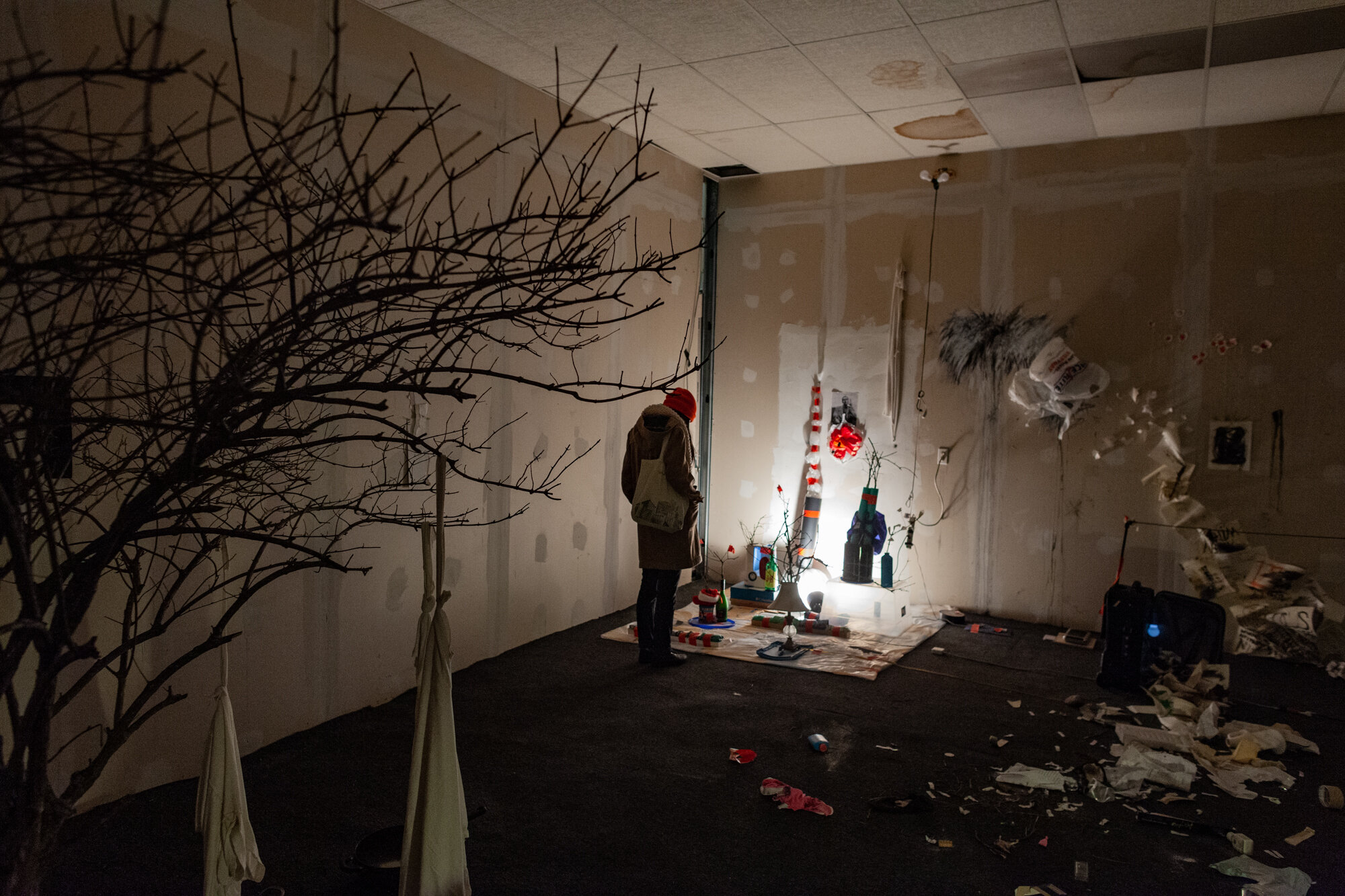 Vignettes within the installation chart the dissolution of human forms as indexed by jackets, pants, and boots in tragicomical stagings: boots and jeans jammed into a shredder as if chopping up a body; jockstraps, socks, and assorted filth strewn pell-mell, like a grisly scene following a suitcase bomb. The only noise within the crepuscular close quarters is the whisper of the artist’s own voice, cooing from a cassette player.

As Just Here took shape over 2020, Currie logged hours every week and worked alone in the dank space, allowing it to become further and further ingrained into his life and isolated survival rituals. It propelled a gestalt mapping of the artist’s own life as a sort of working therapy, and Currie concedes that he has found a bit of utopia in that regard. The artist plumbs the same undercroft of abjected domestic space and queerness as Robert Gober, in whose work the fetishization of the banal plays an outsized role. For Currie, the abject “is really the thing. It is how the work is anchored, but how it is understood is in people’s reaction to it once the installation has been experienced.” Here indeterminacy is wielded like a dripping paintbrush. Understanding this abject microcosm becomes contextually contingent, and, as with Gober, while the reader of the artwork does not need to be gay to decode it, a reading of Just Here without that point of reference is diminished. Through queer-coding trash and demarcating it within a liminal space, Currie marks refuse as separate and, like Gober, finds both unease and its mirrored utopia within the domesticated banal.

“is really the thing. It is how the work is anchored, but how it is understood is in people’s reaction to it once the installation has been experienced.”

John Santomieri’s site-specific performance on the grounds of Frank Lloyd Wright’s Graycliff similarly offered avenues of indeterminacy while tacking closer toward a classic interpretation of utopia. Finding Home (2020) was a one-night-only performance on September 19, 2020, orchestrated as part of Resource:Art and The Buffalo Institute for Contemporary Art’s decentralized programming for PLAY/GROUND 2020. The afternoon and evening performances spread across Graycliff’s immaculate grounds, the latter culminating in a lakeside sunset that draped artist, performers, and attendees in early autumn gold. Each of Finding Home six independent performers (Alma Peguero, Hunter Gordon, Felipe Shibuya, Caroline Gilbert, Allison Cook, and John Salmeri III) utilized stretches of the estate’s lawn to conceptualize new relationships between humans and nature, here represented by a curated selection of Santomieri’s houseplants, and was situated within painted silhouettes of paired eagles, driving home the artwork’s examination of interrelatedness.

This site-specific work differs from Currie’s in many ways, most notably in the opportunity it offers multiple attendees to roam and experience the performances together, rather than in isolation. And while Currie’s Just Here is deeply informed by biographical details and its activation contingent on the artist’s presence, Santomieri’s Finding Home actively elided biographical encumbrance, with the artist here acting more as an orchestrator of the event. The six performers chosen by Santomieri were left to map, explore, and enact their own embedded concepts of home within the frame of their given medium (the group of six performers featured both visual artists and musicians) to a group of plants, queering the relationship between humans and nature, and, in the shadow of an idyll for the wealthy of the 1920s, the meaning of home itself.

In seeking to create a “sonic home” for his potted plant, bassoonist Hunter Gordon’s work cut across the pristine estate aurally and emotionally. Gordon played improvisatory bassoon lines atop a base of drone samples (recordings of a single pitch) to create different vibrations. He alternated playing “out of” and “in tune” to create entirely different auditory environments. Gordon explained,  “I also experimented with improvising different melodies with the drone pitches, specifically using various types of scalar intervals (such as major, minor, diminished, and augmented) to evoke a mood I wanted the plant to feel, finding myself mainly focusing on the relationship between tension and release. All of this improvisation was tied to visual cues such as the plant swaying in the strong breeze and the play of the water, and auditory cues from my surroundings such as boat foghorns . . . and the distant, joyful sounds of my fellow performers.”

Indeterminacy played an active role in this site-specific work, with gestures, grace notes, and choruses of rustling leaves adding to its cumulative weight. It is this evanescent and ephemeral interplay of site, action, object, and experience — removed from the context of a gallery — which concretizes moments of poetry spun into reality, tentpoles of Queer liminal space.

“looking at a lot of the natural phenomenon we’ve experienced and the push to return to nature, even though we are a part of nature.” 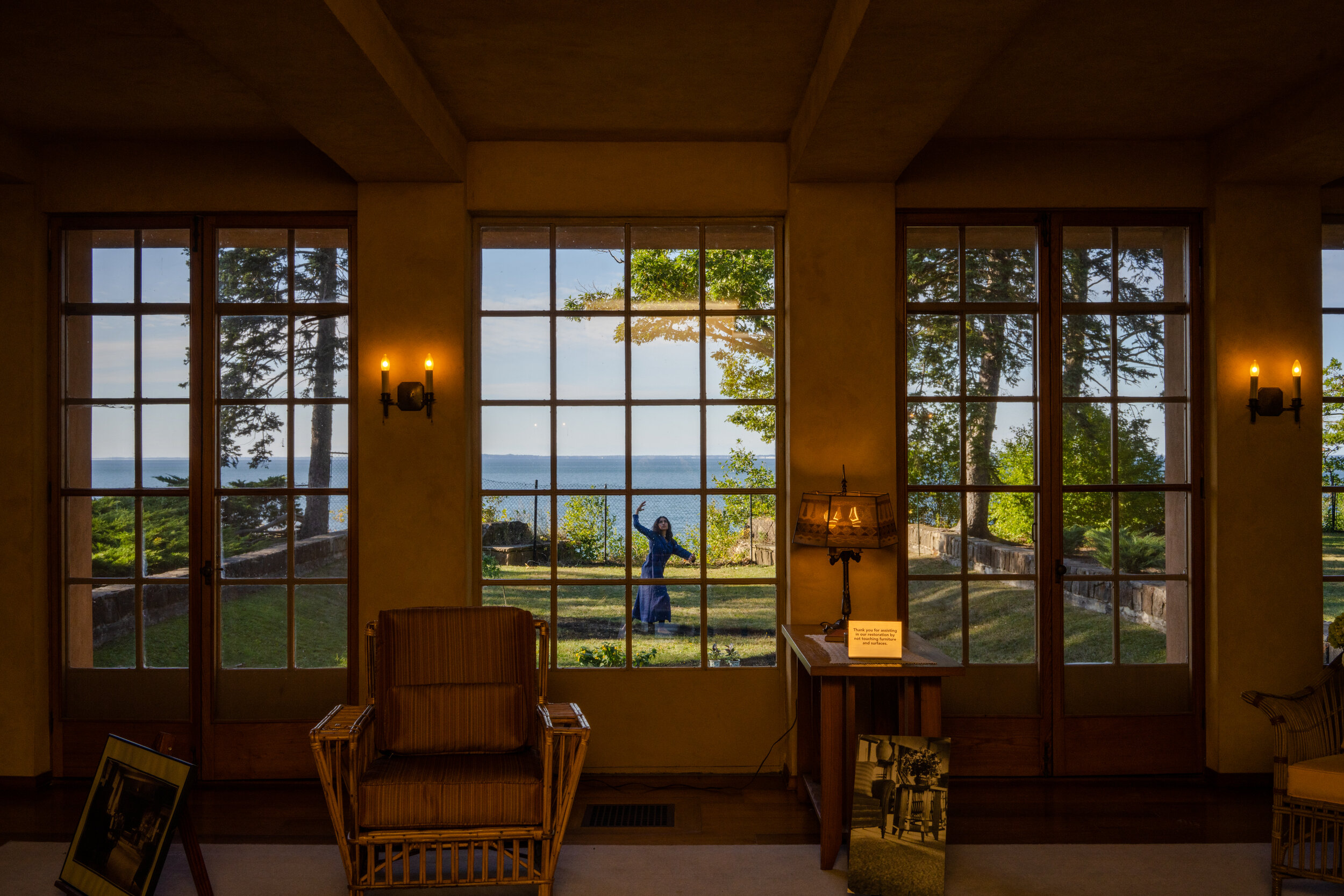 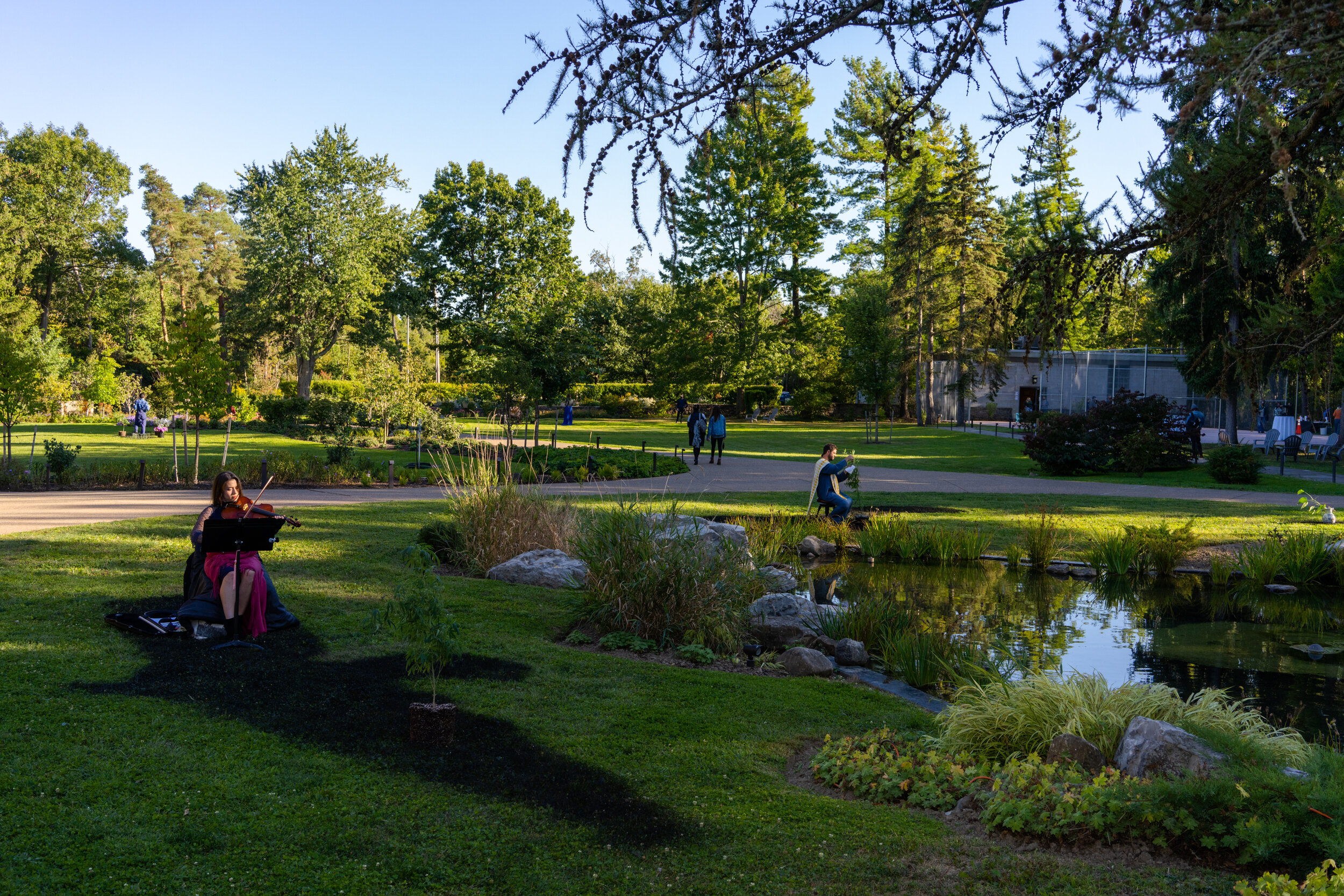 For Santomieri, the premise of Finding Home was “looking at a lot of the natural phenomenon we’ve experienced and the push to return to nature, even though we are a part of nature.” In that way, the creation of Sanotmieri’s site-specific work was an intensively therapeutic process akin to that behind Currie’s Just Here: a process of renewal, of forever-arriving back home. But where Currie’s liminal space focuses on the abject and the discarded, Santomieri recalibrates the relationship between self, home, and nature within a microcosm of space on the edge of Lake Erie.

The hallmark of Queer liminal spaces, like utopia, is that they are by design transitory. The experiences cultivated within these two site-specific installations aren't things which can be distilled into a tincture or indexed alongside sunsets and jockstraps; they have each passed as a breath of air, unable to be reached again in entirety. Queer liminal spaces echo utopia in that their presence must be constantly interrogated and renewed, and can be obtained only while facing forward. In that moment of catching a breath, listening to the mournful drone of a bassoon, and excavating the most personal detritus of life, we are tasked with holding still and then plotting a course into the ever-shifting mirage that is utopia. 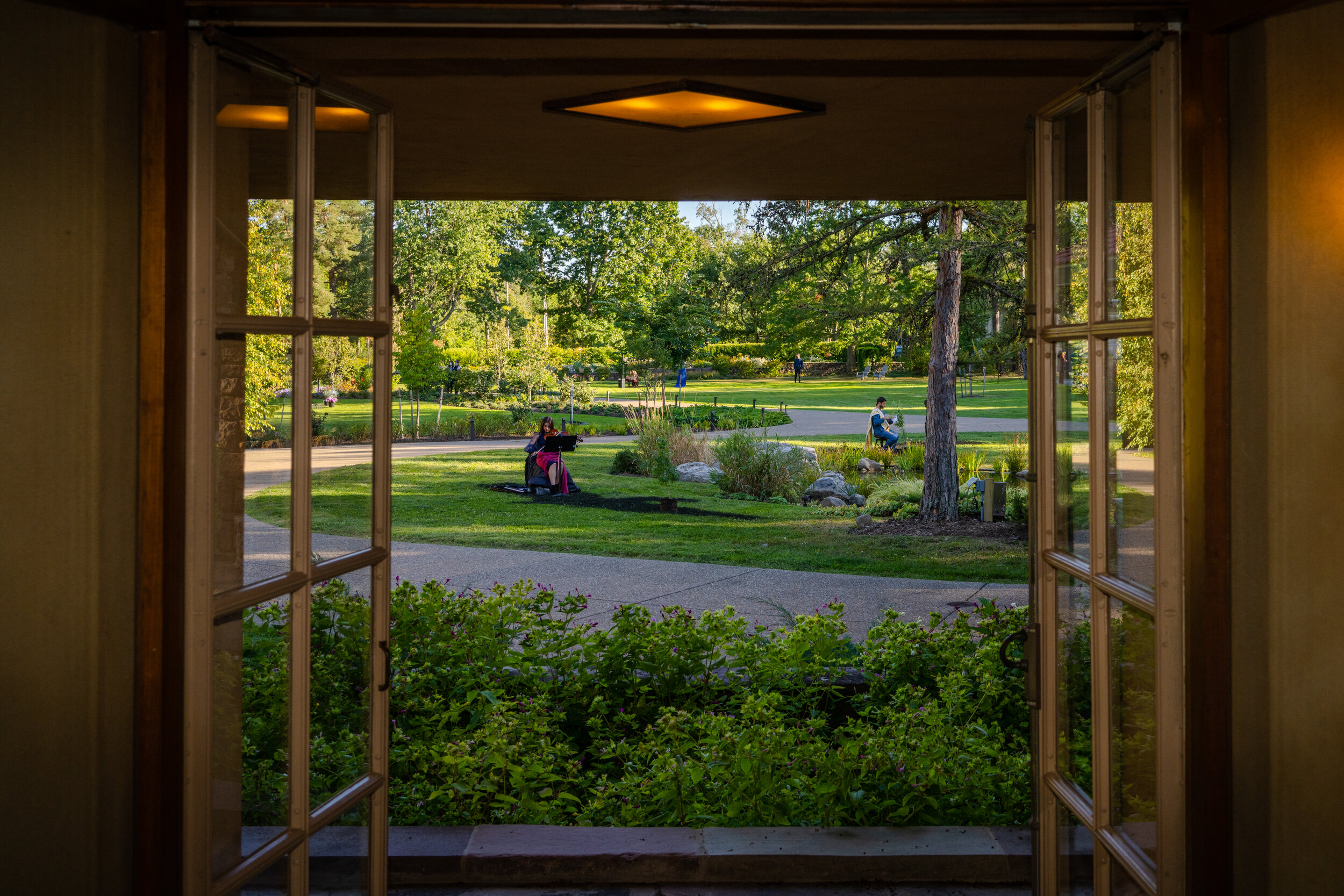 Dana Tyrrell is an artist, curator, and writer from Buffalo, New York.