Letter from the Editor
by :
Nando Alvarez-Perez

Burning at the top of my brain lately have been questions about art’s ability to affect the real world, especially one so radically ravaged as ours. That is, how can art make a material impact outside of gallery or museum walls? How can art move beyond metaphor? How can art become less autonomous and more ecological? How can art be less map and more territory? Central to this question of an art inseparable from the flow of reality itself is a question of scale: how can art stand in a 1:1 relationship to the world?

On a recent trip back to San Francisco I was able to see a reality which has made it increasingly difficult for art to make that stand: the city’s creative economy has been hollowed out by the effects of high rents, dwindling educational and professional opportunities, and morally bankrupt arts institutions. The material conditions for artists even to exist there have become tenuous and are made more so by the city’s size, the inertia of its bureaucracy, and the ever increasing influence of its technology industry over its politics. The dialectics of scale were much on my mind as I saw friends bereft of both opportunities for artistic communion and of peers who have moved on to apparently greener pastures.

Here in Buffalo, far smaller than San Francisco, it’s no secret that we are at a major inflection point for our city. Do we continue to accept the status quo, which has no doubt been economically beneficial for some, but by no means all, and particularly for corporations and large developers, but which has likely played a part in Buffalo’s first population increase in seven decades? Or do we believe that, as our city has changed so much over the last ten years, more of our fellow Buffalonians new and old, more of us, should continue to have a right to determine its future? 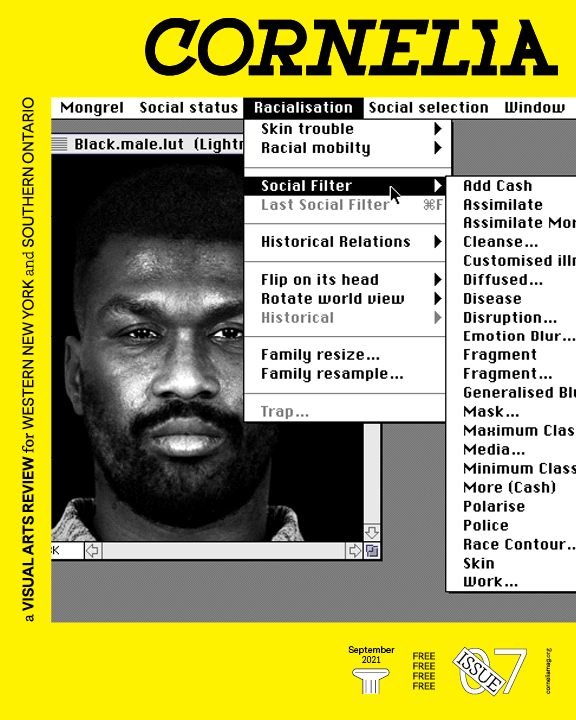 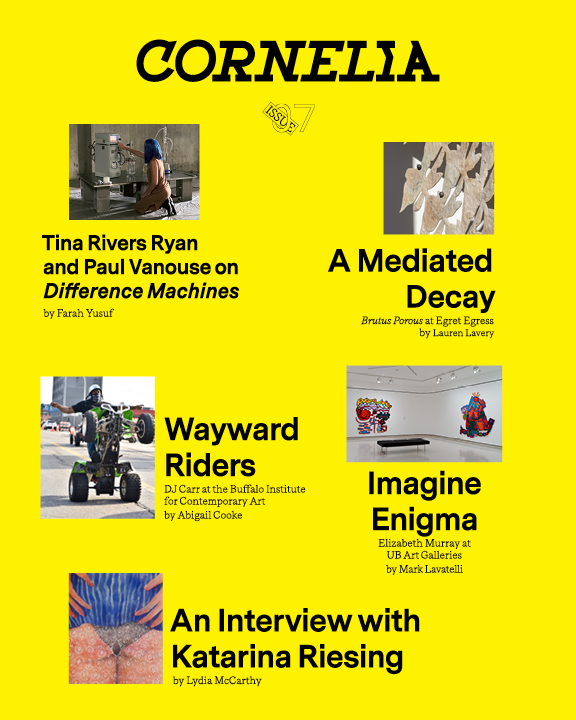 The essays in this issue of Cornelia ask questions about the asymmetrical relationship between an individual and the environment — be it city, town, virtual space, or dataset — they exist in. In our first piece, Farah Yusuf interviews Tina Rivers Ryan and Paul Vanouse, co-curators of Difference Machines: Technology and Identity in Contemporary Art, about their exhibition which opens at the Albright-Knox Northland in October. Lauren Lavery writes about a recent exhibition at Toronto’s Egret Egress in relation to the changing landscape of the city. Abigail Cooke reads DJ Carr’s photographs of Buffalo’s bike crews in his exhibition Crossroads, recently on view at The Buffalo Institute for Contemporary Art, through Saidiya Hartman’s book Wayward Lives, Beautiful Experiments.
Mark Lavatelli covers the extraordinary Elizabeth Murray exhibition at UB Art Galleries, one which takes as its starting point works made by Murray during her brief time in Buffalo. Finally, artist and Alfred University professor Lydia McCarthy interviews her colleague Katarina Riesing about the benefits and pitfalls of making and teaching
art in a rural area.

Together these artists help us understand how
the places we live make us, how we might make them more in our own image, and ultimately how we might begin to create an art as radical as
reality itself.

Published by
The Buffalo Institute for Contemporary Art