Amazing! Who knew that Elizabeth Murray, an artist renowned for her distinctive, colorful paintings, spent two years in Buffalo? That’s why the current show at UB Anderson Gallery is called Back in Town. In her large, complex assemblages, Murray often transforms quotidian subjects into flights of cartoonlike, surreal fantasy, revealing a fertile imagination. Fearlessly merging abstraction and representation and barely acknowledging stylistic trends of the day, Murray invites audiences into a world of painterly freedom both exuberant and jarring.

When UB Art Galleries Director Bob Scalise — a longtime fan of Murray’s work and a graduate of Daemen College, where Murray taught during her stint in the city — discovered that she had spent a couple of formative years in Buffalo, he immediately wanted to create an exhibition. The resulting show includes never-before-exhibited early work as well as a large number of preliminary sketchbook drawings, which provide insight into Murray’s creative process. And, remarkably, the show includes her
last painting, Everybody Knows, completed in 2007, the year of her premature death from cancer.

Wildly imaginative and often fractious, Murray’s paintings extend the tradition of the medium.

Although born in Chicago, Murray mostly grew up further south in Bloomington amid intermittent family financial problems. She developed an obsession with drawing, and thanks to a percipient high school art teacher, she was awarded a scholarship to the School of the Art Institute of Chicago. A new world awaited her there, where early work by fellow students and future members of the Hairy Who, like Jim Nutt and Gladys Nilsson, influenced her understanding of the capacity of art and artists for the outlandish and unconventional. She discovered artistic freedom, grabbed it, and never let go.

Arranged chronologically, the exhibition begins with works Murray made in graduate school at Oakland’s Mills College, which demonstrate her eschewing of conventional rectangular formats and a fondness for collage. The collaged, drawn, and painted Portrait of Einstein & Charles Proteus Steinmetz (1963) shows the mononymic genius and less widely celebrated electrical engineering pioneer peering out of a disjointed, irregularly shaped landscape. In N. H. Lockwood (1963–67), a hand emerges from a sleeve — a fragment of Murray’s own painting smock — to apply lipstick to the mouth of an elongated face.

Newspaper clippings illuminate Murray’s two years in Buffalo (1965 to 1967). Little of her work from that time remains, but several photos and recollections reveal her adaptation of Pop ideas in forceful, even crude, sculptures. A Buffalo News review reproduces Big Pants (1965): a wacky, seven-foot-tall, illuminated and kinetic painting/sculpture hybrid (the knees purportedly rotated). It is both of its time (think late 60s counterculture) and a precursor to her later shaped canvases.

In Buffalo, Murray assimilated the many ways processes of depiction could alter an object. Murray embraced ambiguity, especially the kind that results from fragmenting, stretching, twisting, and otherwise mutating ordinary objects. She drew from cartoon imagery, Cézanne, Cubism, Surrealism, and Oldenburg’s Pop sculptures. In particular, the way in which Oldenburg visualized and amalgamated disparate objects in his wonderfully lumpy and klutzy soft sculptures appealed to her sensibility of metamorphosis. She also liked how he and Andy Warhol proved you could make art from the most quotidian of subjects: ice cream cones, a car, a map of Chicago, soup cans, you name it. Many of the works that came out of her intuitive approach to sculpture were heavy, awkward, and ultimately left on her doorstep in Buffalo when she moved to New York City since she had no place to store them. The exhibition catalogue provides more detail about her Buffalo experience.

Wildly imaginative and often fractious, Murray’s paintings extend the tradition of the medium. And Murray insisted on thinking of her wall-bound forms, even those incorporating elements of relief, as paintings. Murray painted intensely, sometimes seemingly slapdash, and often repeatedly reworking the surfaces. The edges are often left “unfinished” with paint drips that reveal the layering process. 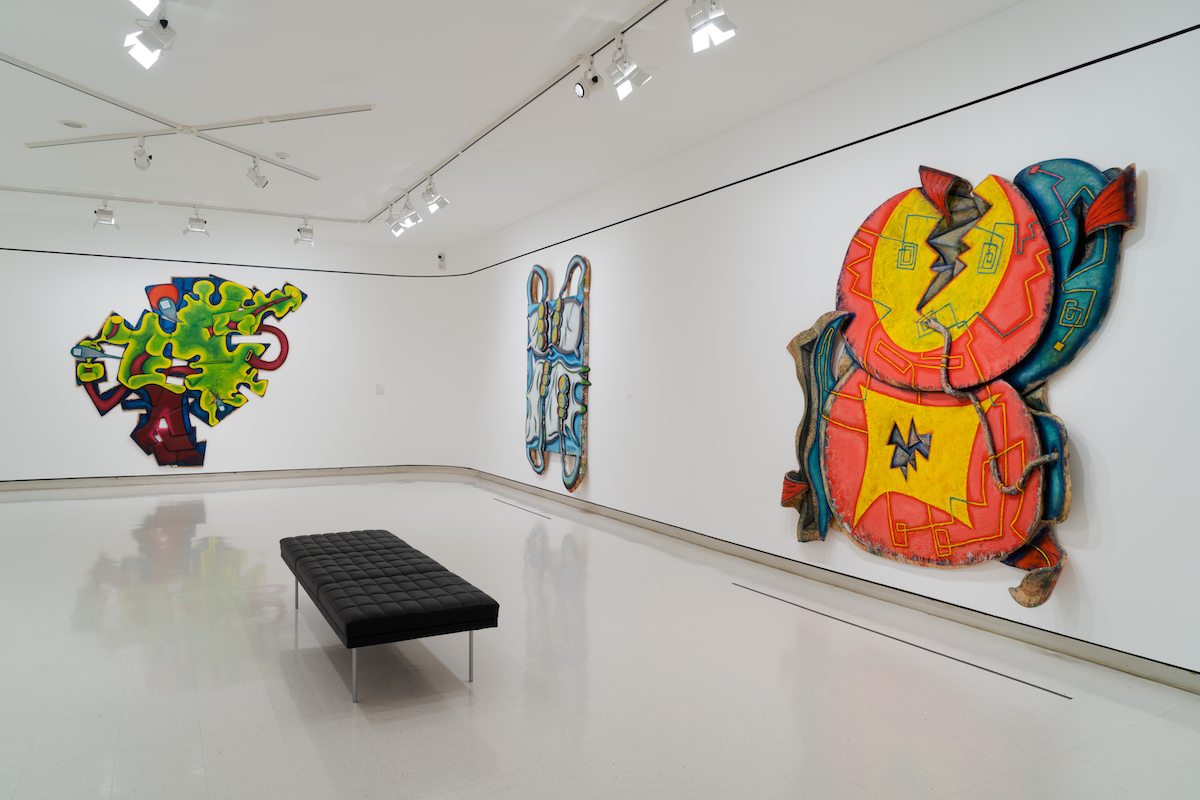 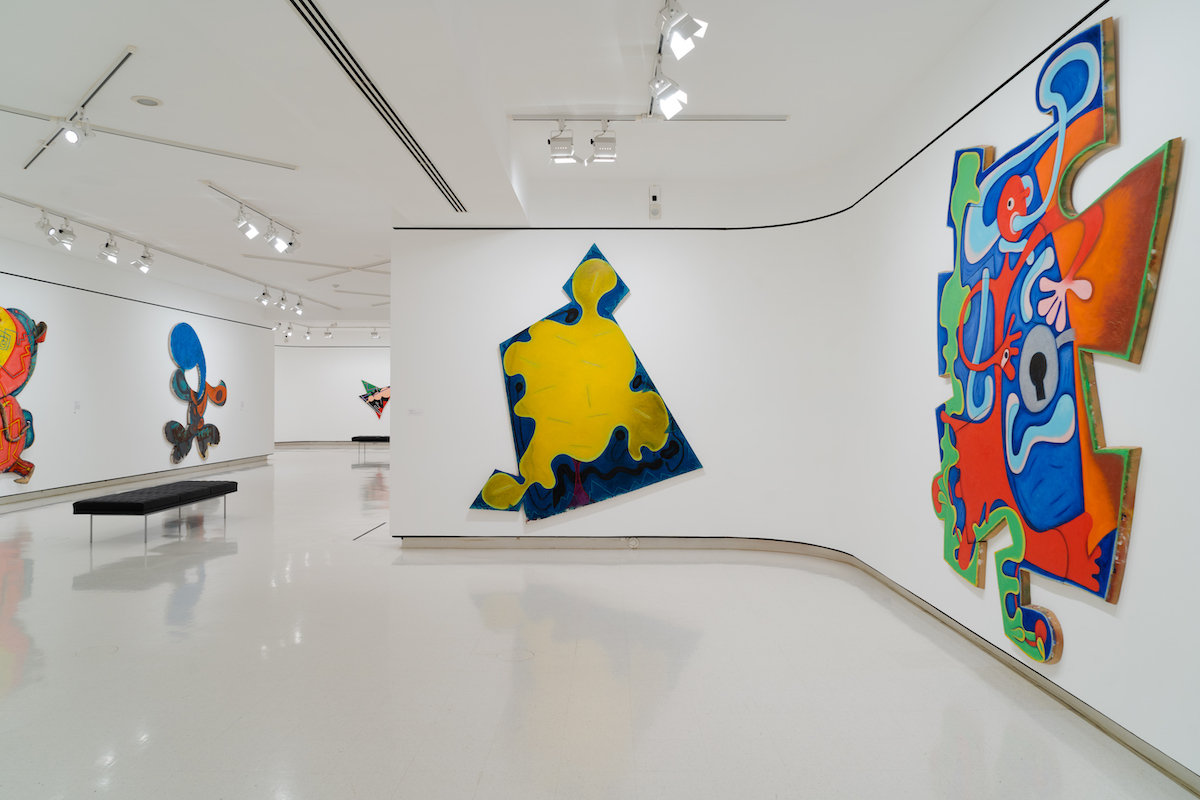 Black Painting (1974) and Tug (1978) summarize her 70s work. The former is as close as she gets to being influenced by then-current trends in New York — in this case, Minimalism. A thin red line curves and loops within the black square, constrained by the top and bottom edges of the canvas. More typical of her 70s style is Tug, a sharply angular shaped canvas in which geometric lines contrast with a mass of linked pale salmon–colored ovals at center.

By breaking out of the rectangle and mixing figuration and abstraction, Murray offers a logical and brilliant extension of Cubism’s radical revolution in representation. Flying Bye (1982) consists of four overlapping squarish paintings that depict distorted tables and an upside-down wine glass spilling big, light blue drops. The subject recalls the Cubists’ penchant for still lifes, and Murray’s breakup of space in overlapping planes updates their techniques of fragmentation. Picasso would applaud. Progressing in this direction, Murray would go on to exploit the negative spaces between the shaped canvases.

Numerous curves define the cartoonlike contours of Water Girl (1982), which features one of Murray’s iconic fragmented coffee cups. Animated by a similarly off-kilter imagination, a skinny red person with ridiculously large feet reaches for a doorknob in Back in Town (1999). An accompanying poem of the same title by Bob Holman, Murray’s second husband, identifies the yellow-green shape on the left as a shadow and the pale blue stream emanating from the figure’s mouth as speech.

She delights in ambiguity and the tension that results from contrasting emotions.

Sandpaper Fate (1992–93) shows Murray’s mature, independent, complex style. Irregular, angular lines overlay two large hot pink and golden yellow shapes abutted by a trough-like form; four triangles curve forward from behind as if to hold everything in place. The upper egg shape appears to be a face (Humpty-Dumpty’s?) riven by a jagged crack that extends from its crown to the mouth. Covering the mouth is a slender hand connected to a sinuous snakelike arm reminiscent of the curving belt in the much earlier Big Pants. The lower shape, which could be seen as a torso, has a jagged hole where the heart should be. Her preliminary drawings for the work confirm a figural interpretation. The face-like upper portion appears in various configurations; an early one shows two egg shapes with big cracks. In another version, the figure’s left eye appears to shed a tear and the narrow mouth distends into a wide grimace. The curving triangle on the left looks like an arm holding the patinated trough shape. What is this? A tool? A weapon? It is cryptic.

Murray clearly enjoys subverting standard representational techniques. She delights in ambiguity and the tension that results from contrasting emotions. As critic Thomas Micchelli pointed out, “The beauty of her art is that it is never one thing or another. It can be giddy and ponderous, sweet and scathing, very often in the same picture.”1

With the exception of the large, vivid, red and green painting 96 Tears (1986–87), the second floor of the exhibition is dedicated to works on paper. Her sketchbook drawings provide insights into how she developed the imagery in the paintings. In addition to these, several shaped pastels, and a handful of other mixed media works on paper, there are many complex lithographs. In the 1980s, the renowned New York printmaking studio Universal Limited Art Editions invited Murray and other up-and-coming artists to make prints. Murray chose lithography because the process most closely related to her drawings. She printed most of her lithographs, like Shack (1994), with many colors; others, like the yoga-evoking Up Dog and Down Dog (1987–88), require complicated irregularly shaped frames. Several, like Shoe String (1993), are three-dimensional, echoing the relief-like paintings. She also collaborated with the poet Anne Waldman, whose poem Fun-House Mirror, for Elizabeth Murray is reproduced on the back wall.

Despite her annoyance at being described as a painter of “domestic dramas” — pointing out that Cézanne was never characterized as such despite painting the same subjects — her coffee cups, tables, and loosely bodily organic shapes do suggest glimpses into Murray’s life. The spilt liquids and cracked cups in Red Corner (1999) and Cracking Cup (1998), for example, indirectly refer to mild domestic chaos and are Murray’s way of bringing her experience as a mother, wife, and professor into the work.

In conversation with Paul Gardner, she explained:

The cup is an extremely female symbol. It can be seen as an encasement for the female genitals. It is a male symbol too: the winner of an athletic event gets a cup. I also find the cup — as an object — a beautiful image in itself. Handle, saucer, cup — three circular shapes. . . . I see my own work as androgynous. Art is about the male and female components in all of us.2 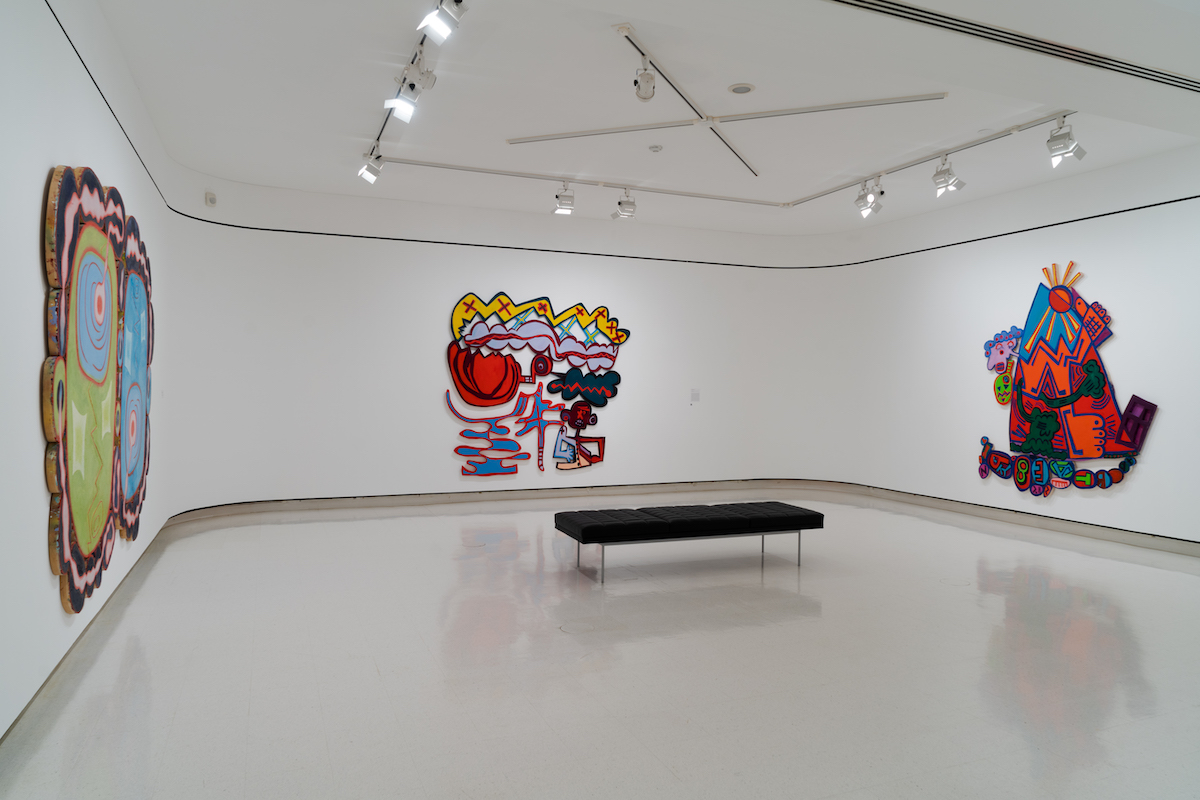 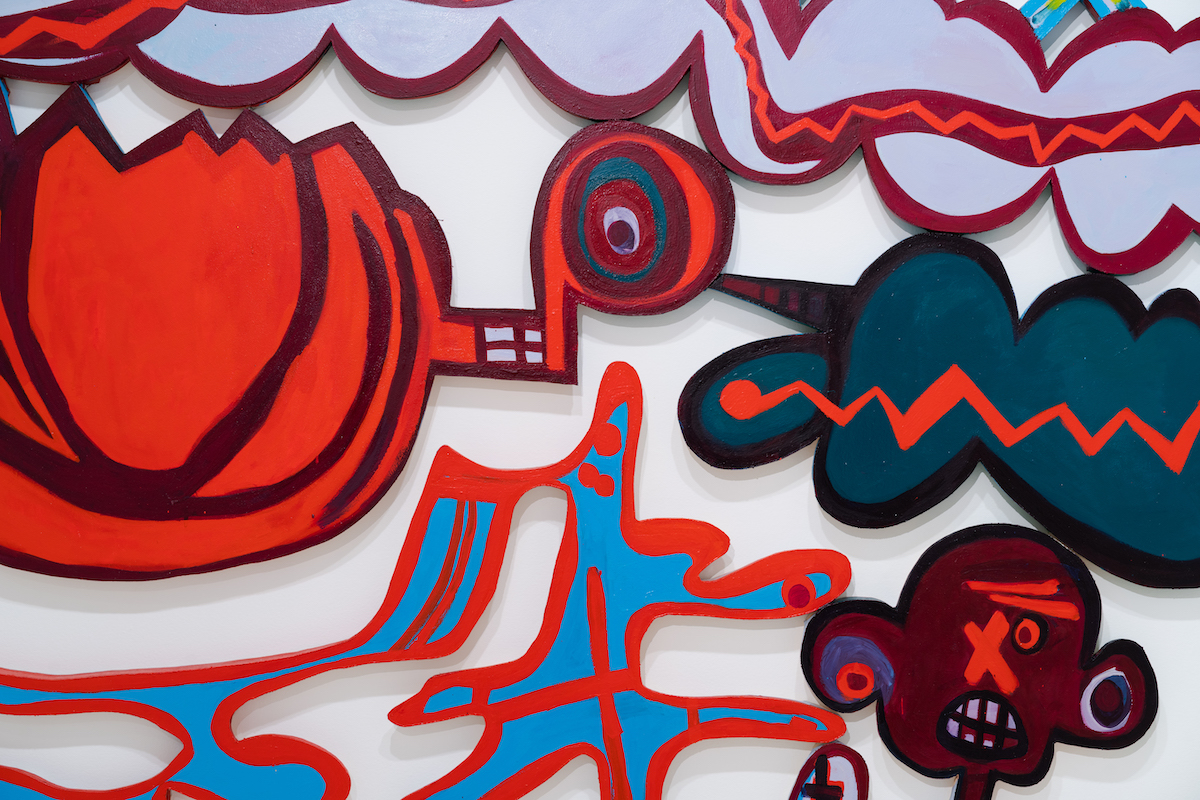 Unlike Murray’s contemporaries who countered the male-dominated art world by turning to explicit imagery, like Nancy Spero, or radical performance art, like Carolee Schneemann, Murray remained committed to the primary experience of mixing and applying paint.

She overcame art world patriarchy by sheer persistence and unbridled creativity. As she gained renown, she joined the Women’s Action Coalition and protested, alongside the Guerrilla Girls, the Guggenheim Museum SoHo’s lack of female representation when it opened in 1992.

Her last painting, Everybody Knows (2007), can be seen as a summary of her major style: it includes the x’s that were used by Keith Haring to symbolize AIDS-related deaths; strange forms append/attack the body of the distressed figure, and the large heart/rose may represent love. Simultaneously universal and personal and ambiguous, it brings together the elements that exemplify her artistic inventions.

From Chicago to San Francisco to Buffalo to New York, Elizabeth Murray unceasingly followed her own independent path, in her own words, “harnessing the energy of the paint.”3 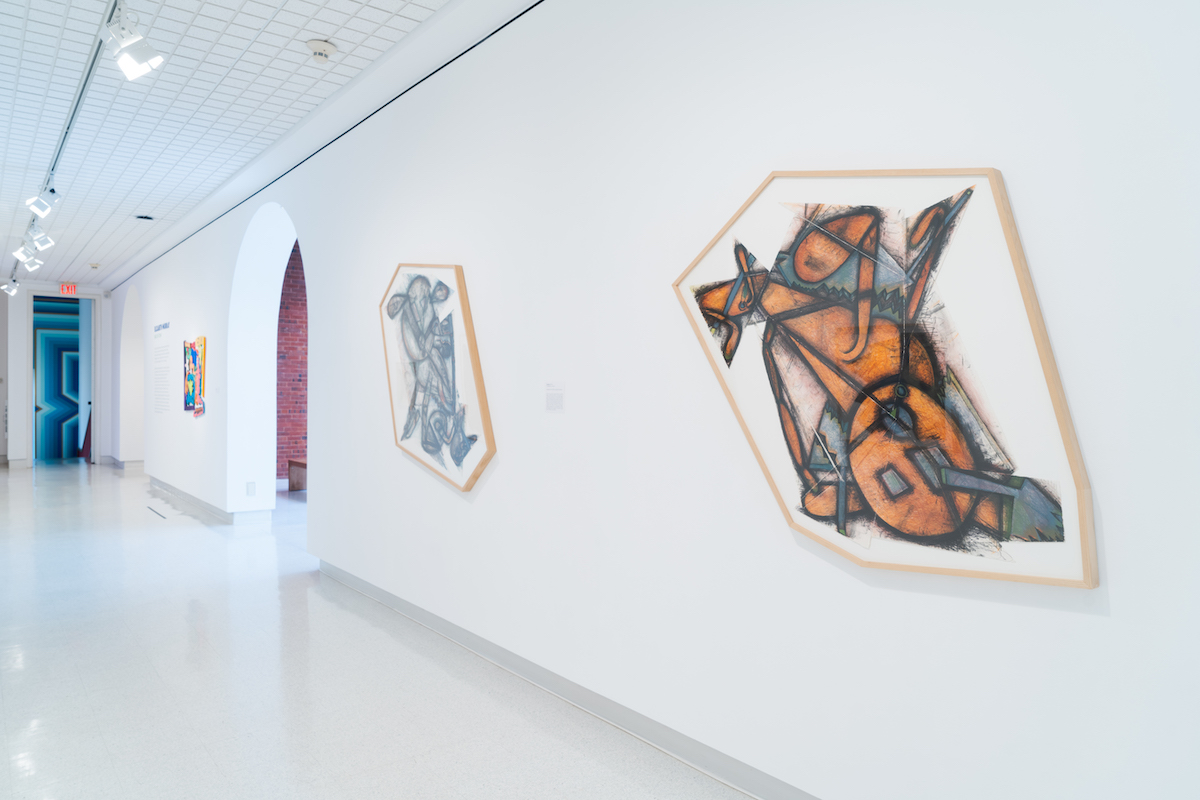 Illinois native Mark Lavatelli, known for encaustic painting, has exhibited widely in Western New York for the past thirty years. Professor Emeritus of Art at Medaille College, he often uses images of trees. He has participated in numerous artist residencies and writes art criticism.