A Mediated Decay
by :
Lauren Lavery

In spite of its reputation for strength and resilience, concrete is a very porous industrial material. The proliferation of concrete and glass condominium skyscrapers in many major cities, where they frequently replace smaller, more affordable housing, is a lucid exhibition of trust in the material’s fortitude. Concrete’s porousness seems somewhat to counter the imagined structural integrity of a large, multilevel building, and in turn, that of the paved streets and parking lots surrounding it. With a global climate crisis quickly escalating to unprecedented levels, one could argue that contemporary city planning initiatives should be more focused on reducing the use of concrete in favor of locally sourced, sustainable building materials; more affordable housing projects; and renewable energy sources instead of continuing to erect structures that increase the already dystopian class divides between residents.

In 2007, the City of Toronto publicly released “Greening’ Surface Parking Lots,” a set of guide-lines for developers that includes suggestions for a variety of “green” activities and initiatives to mitigate the environmental impact of pavement.1 In 2016, a number of community groups in collaboration with The Laneway Project, a not-for-profit design consultancy, availed themselves of a “Beautiful Streets” program offered by Toronto’s civic Transportation Services in order to “puncture” two laneways — themselves porous connectors through the city. This, as the past work section of The Laneway Project’s website proclaims, aimed to “beautify the right-of-way for residents while improving their environmental performance, by increasing stormwater infiltration, benefiting the entire city.”2 A closer read of the superficially aesthetically pleasing site reveals a curious opacity as to who is directly responsible for the initiative and apparently authorized to make such “beneficial” decisions for the entire city.

Egret Egress is a project space located on one of the now-punctured laneways, Willowvale Lane, which connects Essex Street to Barton Avenue and the popular Christie Pits Park. Small single-car garages in various states of repair and featuring, in large numbers, colorful, abstract murals on their garage doors, line the laneway. Cars are tightly parked in spaces where garages had been torn down, and any remaining crevice is filled with scraps of soggy cardboard, warped plywood, and other assorted bits of plastic and metal detritus. Without its diamond-patterned punctured median, the laneway would be indistinguishable from any other. In its current state as a cut-through for cars, pedestrians, and animals, the laneway works for residents on multiple levels — discarded or underused materials are left out for others to pick up, and garages are used for storage and flexible studio space and the intervals between them filled with parked vehicles — in short, the laneway seems to function well without the need for further beautification in the form of additional concrete pavers. 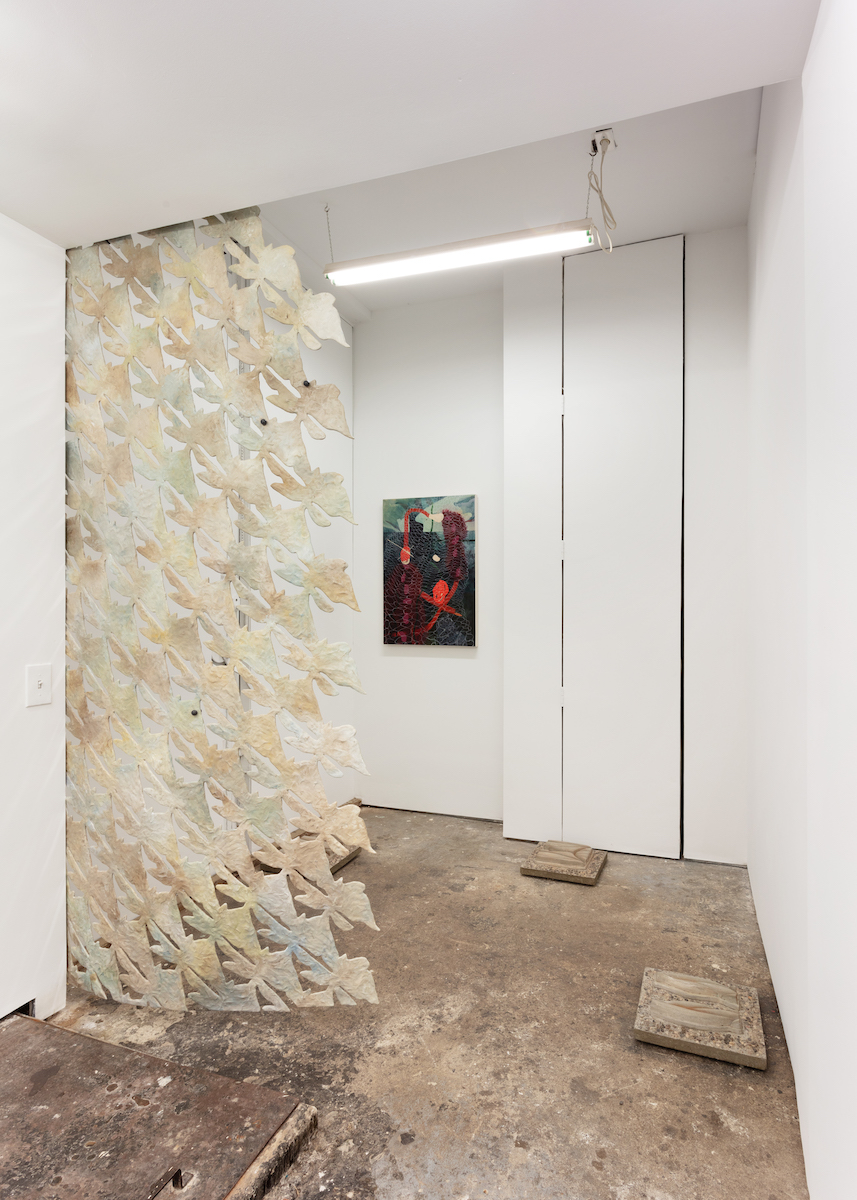 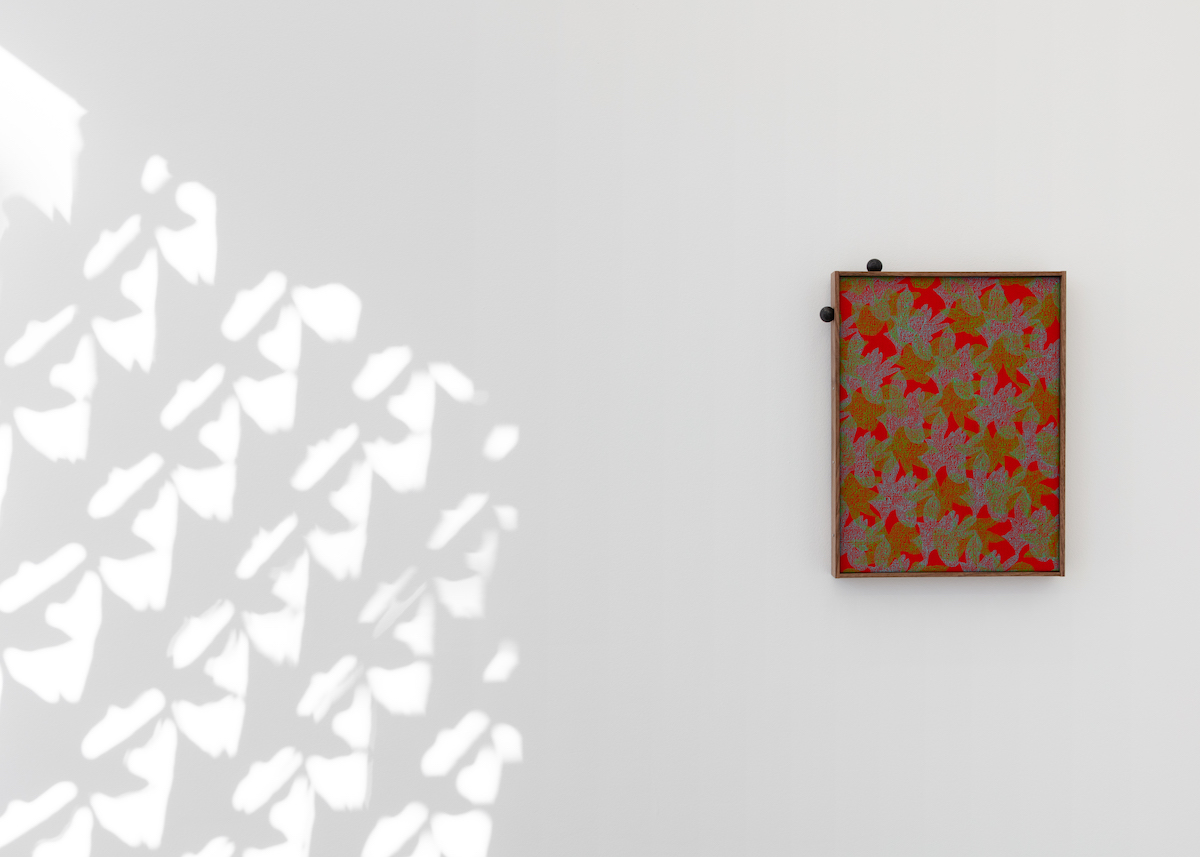 Camouflaged like dusty gray moths, two of artist Emerson Maxwell’s concrete and pea gravel sculptures, Endless Recovery (6 & 7) (2021), appear to extrude naturally from a patch of pavement just to the left of the gallery’s open door. Although the form of the 14 x 14–inch squares resembles that of everyday decorative paving stones, their embedded concrete designs reveal the fossilized body parts of a humanoid creature of the kind found in sci-fi films like Ridley Scott’s classic Alien (1979). The stone nearest the door features the most human-like image: two hands with palms down and thumbs facing outward. The other neatly edges a line of green weeds ambitiously growing out of a large crack in the pavement. The design on this stone — a combination of supernaturally sized abdominal muscles and a close-up view of an insect’s jaw — is the most enigmatic and otherworldly of the series. The origins of the half-human and half-alien being suggested by these archaeological traces remain unclear. Visible through the open door, another of Maxwell’s stones sits at the back wall of the gallery, beckoning the viewer to move from the laneway into the coral-colored garage-turned-project space, which recently hosted the group exhibition Brutus Porous.

A strange, biomorphic lattice structure, Emma Welch’s Climber (with orbs) (2021) juts into the space between the entrance and this third Endless Recovery stone, its bottom tip ever-so-slightly angled as if a toe timidly testing water temperature or a climbing vine reaching out toward the dimming sun. The moldy gray-green-then-pink tinge of its textured surface adds to the sculpture’s anthropomorphic qualities, suggesting that the work — or at least whatever coats its surface — is organic and alive. Small carbon-colored orbs attach to certain “leaves” in a way that leaves ambiguous whether they are parasitical dependents or exploited hosts. Evocations in the work’s honeycombing pattern of a jagged switchblade or an ornate, sharply edged wrought-iron fence, however, undermine any lingering benign associations. The work’s blade-like tips cast increasingly distorted and intimidating shadows across the gallery’s floor
and onto the opposing walls in the fading afternoon light.

Welch’s wall works, Flower Fence (8) and (10) (both 2021), feature an analogous patterning but here on psychedelic steroids. A few more carbon orbs adhere to the edges of the wooden frames, but in this case their presence feels more akin to snails adorning a vine. Neon greens, purples, and magentas overlay fluorescent reds and seem to vibrate visibly, not unlike a Magic Eye stereogram illustration. The results allude to the ways in which simulation (in this case optical) can both distract from and generate progress — here we might recall how the city’s increasing number of giant glass and concrete towers add only to the simulation of progress and success under present conditions of capitalism, and illuminate little about those who they displace.

Katie McDonald’s painting Short Distance Travel (2021) engages similar hallucinatory effects. Again, repetition is evident in not just the works’ color but also their playfully superficial representation of space and depth. A neon-red eel with two white heads atop a briny field of blue and green serves as an umbilical connecting a pair of nebulous, sea cucumber–like shapes in a fuzzy deep magenta spotted with lighter passages. A netting of chalk lines covers the entire composition and ensnares the forms with its expanse. But as in Welch’s Climber and Maxwell’s Endless Recovery pavers, the curious autonomy and animacy of the obstructive form counteracts the initial threat it imposes. In all of these works, there are ongoing tensions between living and nonliving, organic and inorganic, potential and obsolescence.

Another of Maxwell’s stones sits below McDonald’s painting. Its concrete inset of a pelvis and two thigh muscles echoes, albeit more literally, the painting’s organic shape. As they do outside, the stones inside the gallery blend in with the poured concrete floor. It is these interior pieces that strike me the most; their presence is very much static, inanimate, spiritless in stark contrast to the other works in the show. Here, their decorative appeal appears more akin to something seen in the background of another Ridley Scott sci-fi classic, Blade Runner (1982), especially those scenes photographed in Frank Lloyd Wright’s Ennis House, which was constructed from “textile blocks” whose design was influenced by Mayan Revival architecture. 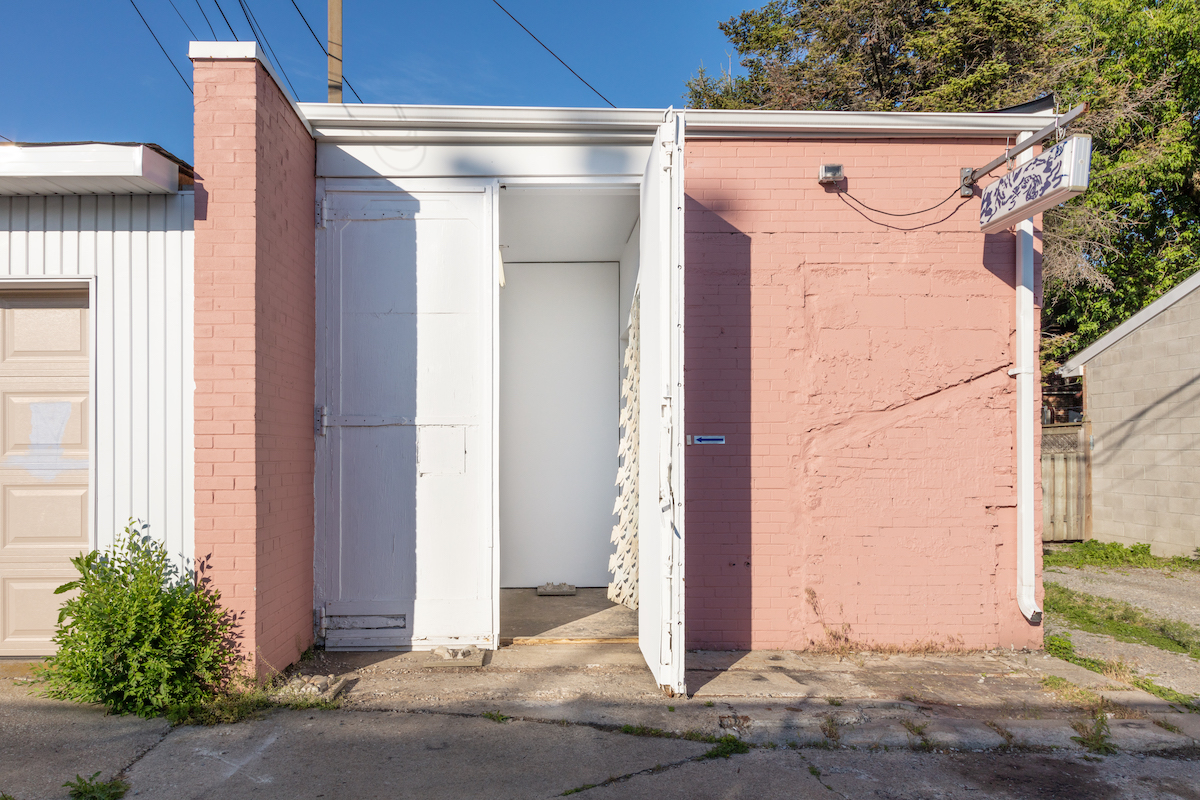 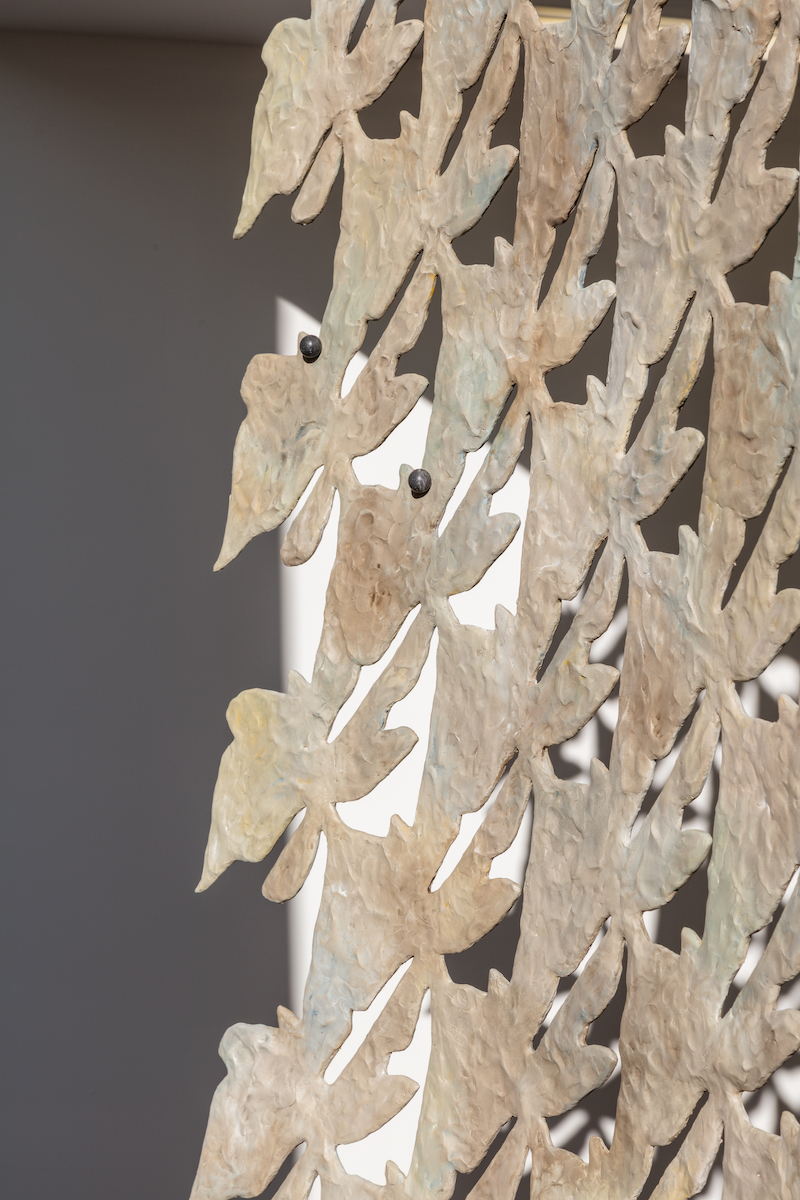 Rewatching the Reagan-era film in 2021, one of the more arresting visual elements is Scott’s depiction of the city’s lower-class dwellers scrapping out an existence among the obsolescing, half-ruined technologies of the future. The presence of Wright’s Mayan motifs in Deckard’s apartment positions this 1980s vision of the future as somehow already archaeological. It is interesting, then, to think of Maxwell’s Endless Recovery pavers as obsolete relics of an imagined future from a now-antiquated time. In fact, all the works in the exhibition appear to be germinating or eroding at various speeds and on divergent timelines: Maxwell’s stones passively blend into the gallery floor and between the cracks in the laneway pavement; Welch’s sculpture “grows” mold and bends toward the sun and her wall works emerge three-dimensionally before your eyes; and McDonald’s briny sea creatures multiply in their endlessly blue dimension as the chalky netting threatens to restrain them. All these imagined worlds harken back to the city as a technocrats’ wasteland, the proliferation of concrete inhibiting any natural, “green” life, which instead must sprout between cracks in the eroding pavement or be introduced artificially through extraneous and capital-intensive city initiatives.

By the time the Willowvale Lane puncturing project was complete, a house near the end of the laneway began to see consistent flooding that eventually damaged its foundation.3 Due to the opacity of who is directly involved or responsible for it, the homeowners were unable to secure compensation for the structural damages; after renovating the home with their own money, they eventually sold it to leave the city. Beyond its glossy virtual presence, Willowvale Lane emerges as a green weed–riddled path connecting streets, making space for parked cars and a handwritten “FREE” sign on a soggy piece of cardboard in front of a well-weathered pile of scrap wood. 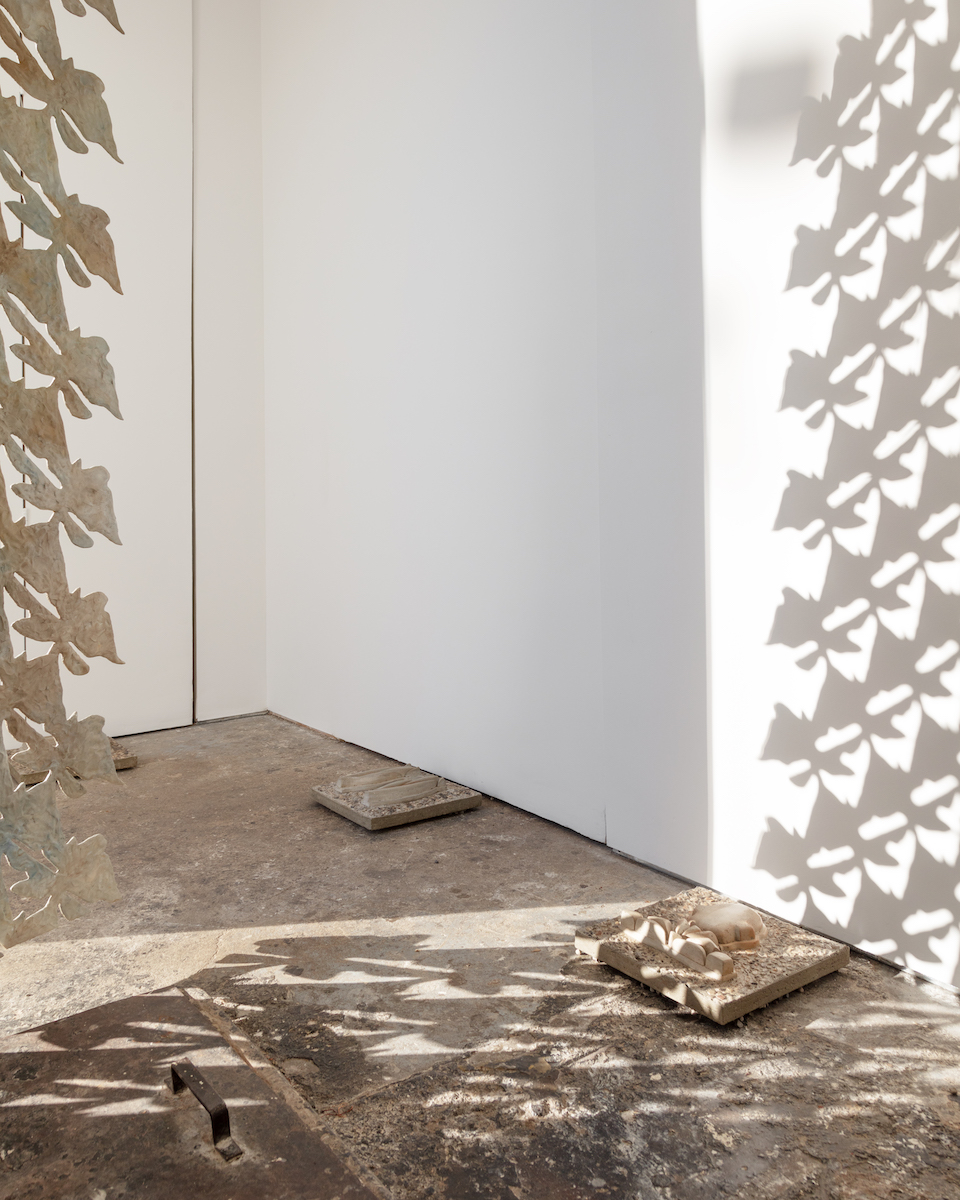 3 I am indebted to a conversation with Egret Egress organizers Craig Spence and Jenny Warne who shed light on the recent happenings to the home, where I also lived nearby for a few years and witnessed the renovations throughout a period of time without this context.