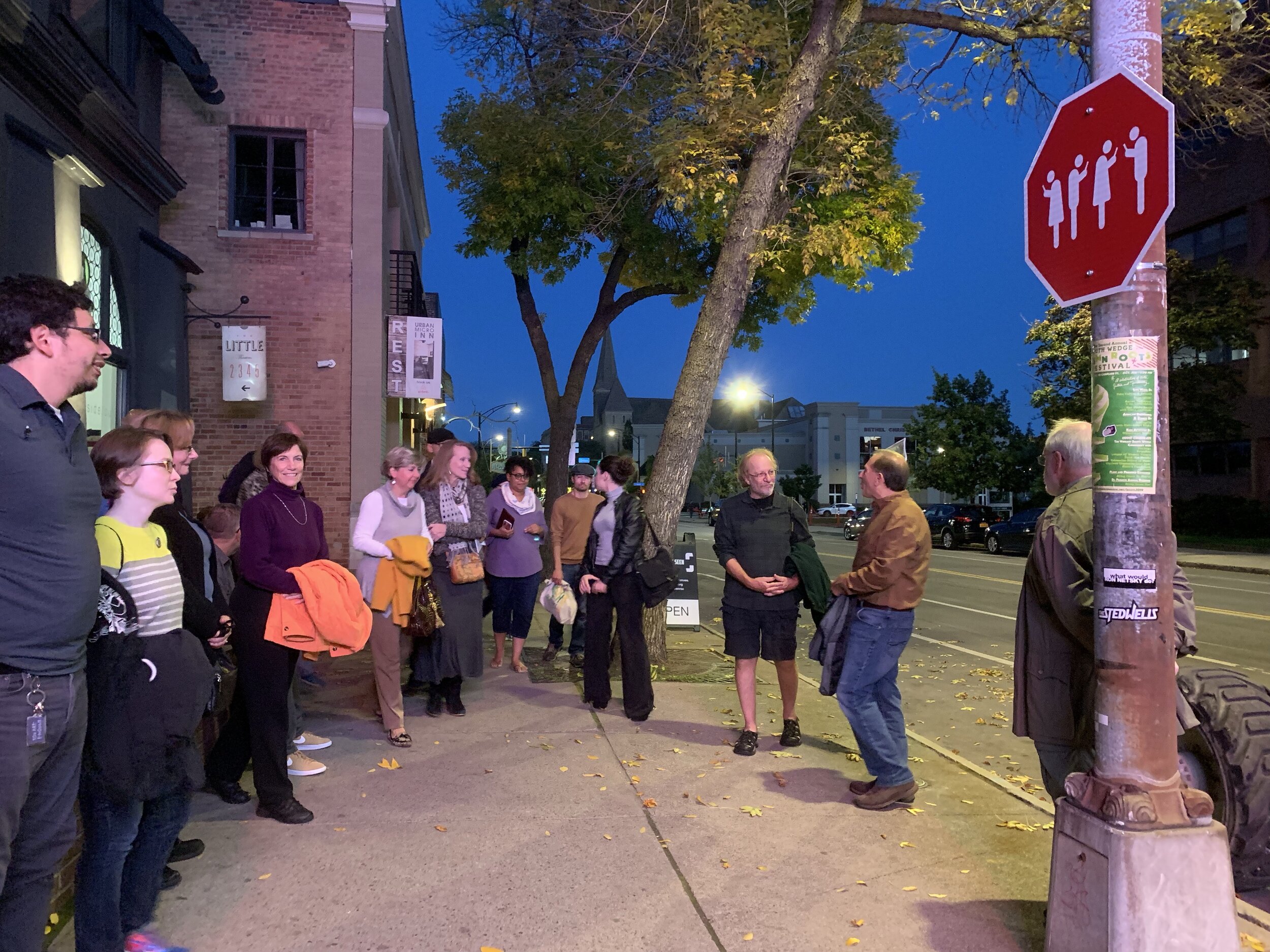 Spanning the heart of Rochester, the small venue biennial Current Seen offers a snapshot of the state of artmaking, art writing, and curating within the city today. Anchored—physically and curatorially—by Rochester Contemporary Art Center (RoCo), Current Seen reaches east to west from Visual Studies Workshop to Joy Gallery across Core Venues, Framework Venues, and public art. With a bit of chutzpah and a good pair of shoes, it is possible to see all of the project in a single outing. And therein lies the point of this less-than-sprawling biennial: to discover the city of Rochester. This reflects a different curatorial mechanism from other, larger-scale biennials, in which their host cities recede as background for the art. For Current Seen the city of Rochester comes into full focus alongside the artwork and becomes a coequal raison d'être of the entire enterprise.

In a conversation prior to the biennial’s opening weekend lead organizer Bleu Cease spoke at length about how the 2019 iteration of the project is meant to “examine [Rochester’s] current moment as a changing city, create sustainability within [the arts] community, and directly support artists and curators.” Cease, who is also RoCo’s Executive Director/Curator, believes that by integrating the arts into Rochester’s businesses, its disparate neighborhoods, and the lives of its citizens, the biennial offers an egalitarian moment of arts access while also demonstrating the vitality of the arts community to the Western New York region. With more than 20 sites and nearly 200 participating artists, including public art deployments, Current Seen represents an exponential growth from past editions of the biennial (after inheriting the project from the Memorial Art Gallery in 2015, RoCo’s 2017 re-fashioning, RBNL, only included three venues).

As the administrative and geographical anchor of the biennial, RoCo is also its curatorial lodestar. The single site features the dense State of the City exhibition alongside Heather Swenson’s public art project Observation Towers (2019), an installation of Michael Goldman’s Urban Pictograms (2018–ongoing), and a running screening of John Maybury’s Remembrance of Things Fast: True Stories Visual Lies (1994). Most engrossing of the work within State of the City is Meredith Davenport’s accumulation of documentary photographs, archival images, and film footage, which reflect the changing landscape and architecture of downtown Rochester. The work becomes a meditation on growth, destruction, rehabilitation, rebirth, and how narratives of cities are constructed both literally and contextually. Also worthy of mention is the Artists Sustainability Survey organized by Reb Ayşe Geduk, Gary Lamaar, and Ray Ray Mitrano. Reminiscent of the “Art/Museum Salary Transparency 2019” spreadsheet created and disseminated this past summer by Michelle Millar Fischer, the project drills down into the relationships, accessibility, and experiences shaping Rochester’s creative community and its workplaces. Gallery-goers are encouraged to participate in the project by writing how they are affiliated with the arts on a piece of paper and pinning it to an adjacent string, an act that literalizing the map of creative labor and transference of value across our creative economy. State of the City aims to tick all Current Seen’s overarching thematic boxes of community, displacement, development, and gentrification—themes that, unfortunately, are somewhat inconsistently addressed in other venues.

A few doors down from RoCo at Greenwood Books, Read Art @ Greenwood, curated by Scott McCarney, demonstrates the porous nature of art and the everyday. The project embeds over 100 artists books sourced from regional artists, collectives, small presses, and independent publishers amid their mass market counterparts in Greenwood’s vast stacks. As wrapped in transparent vinyl and flagged, the artists books stick out like so many tongues on the shelves. Here, McCarney and Greenwood Books articulate the complicated divide between artists books and commercial publications, and they encourage visitors to pause and thumb through these one-of-a-kind or small edition texts before seeking out more art in the everyday.

Trekking down to Visual Studies Workshop (VSW), you begin to lose the sense that you are in downtown Rochester. Trading storefronts for lawns, the diverse constitution of the city is writ large within this brief jaunt. VSW’s contribution, Seeing Change, curated by Tate Shaw, is a confrontational exhibition on bodily articulation and transgression within our panoptic society. In all of its endeavors, VSW strives to elevate marginalized voices, especially in light of dominant structures of political power, and Seeing Change stands as the most overtly political exhibition within the biennial. The work, while sometimes comically “woke,” points toward serious discourse. And while the curatorial premise that “making art in general could be seen as political” is thin, Rachel Fein-Smolinski’s installation of diagrammatic bodies, anonymous archival portraits, and wallpapered and layered visuals hung with me long after walking out of VSW’s doors.

Doubling back toward the city center, Inside/Out at 248 East Avenue stands out in the context of a biennial where so many things can get lost as an exemplar of good art curated well and programmed assiduously. Curated by Colleen Buzzard, Inside/Out traverses the space between public and private, hard and soft, and human and inhuman. Standouts include Cecily Culver’s 2nd Ave Manhole (2015/16): a manhole cover atop a base of constructed, cracked concrete seemingly plopped onto the floor of the gallery. Emanating from the piece are sounds of the underbelly of Brooklyn that the artist recorded by lowering a microphone deep into a manhole. Apart from the Robert Gober–like intrusion of infrastructure into a gallery, 2nd Ave Manhole offers a moment of unusual poetry and a minute space for reflection. The other standout within Inside/Out is Artemisha Goldfeder-Brooks’s A Human Unit (2015/2019). Bricks, each wrapped in pieces of fabric, are layered like the exterior corner of a home against a wall of the gallery. The bricks read as firm material made vulnerable and delicate by their cloth wrappings, a transformation instantly and morbidly relatable to our own vulnerable bodies. Are these bodies-cum-bricks dead, or simply resting? As is the case with Culver’s work, Goldfeder-Brooks’s offers a juncture of utilitarian versus domestic material, and the success of both projects rests on the uncanny feeling arising from inanimate objects that have been imbued with humanity. 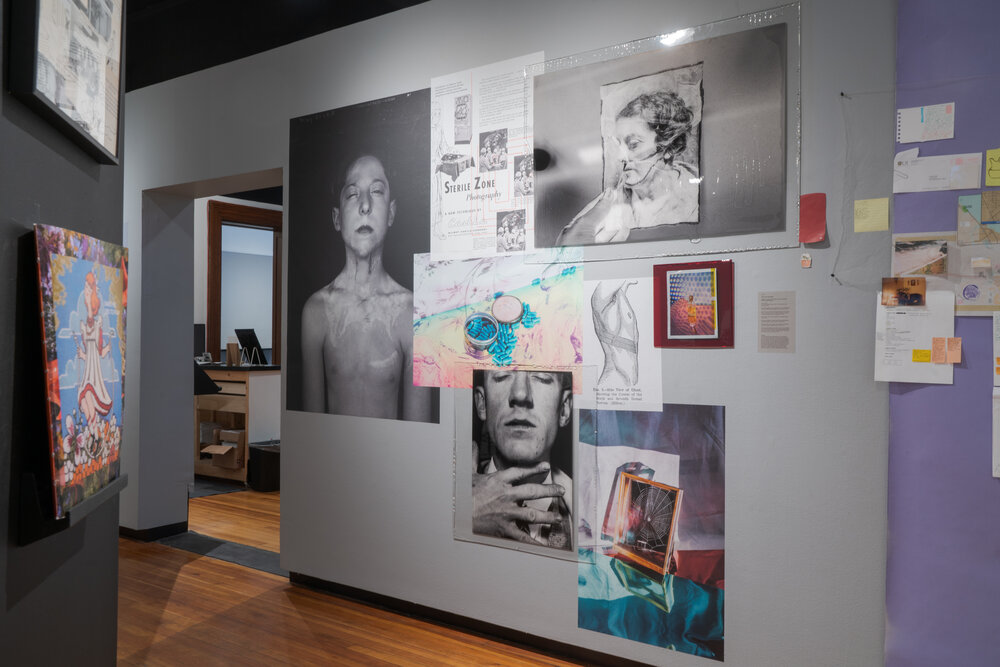 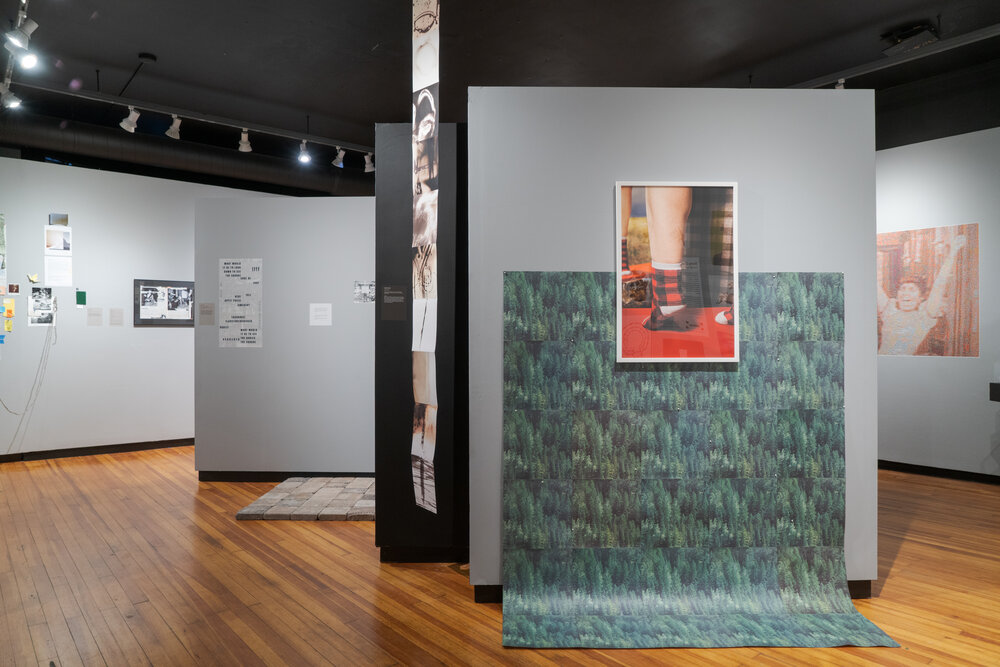 Half a mile away, Culver is present once again with Best Foot Forward, this time as a curator. Culver takes control of an expansive, raw space on the first floor of 280 East Main Street with a programmatic eye toward how human bodies exist within cities. Artists here utilize networks, walking, and vulnerability to reflect on the state of the cities they occupy or have occupied and how to tack forward into the future. Each of the paintings in Kyle Butler’s Reconfigured Ends (2019) is an abstracted map of dead-end streets in Buffalo. Removed from context, Butler’s stoic forms vibrate closer toward cross sections of circuitry than mapping. As seen from a God’s-eye vantage point, plotting and mapping onto Butler’s blank geography of dead ends is at once possible and impossible.

In Scanning the Ground (2018–ongoing), Nick Marshall litters an excavated portion of the venue’s floor, cordoned off with cinderblocks and orange twine, with inkjet prints and scratch-off lottery tickets. It’s possible to imagine this parcel in any city, but the scratch-off cards casually tossed into the dirt speaks to the use, or disuse, of treasure in the race for development and gentrification taking hold within many Rust Belt cities.

Most poignant of all is a performance still from Angela Ellsworth’s Is This the Place (2006–19) showing two female-presenting bodies in matching clothing facing away from the camera, holding hands. In 2006, Ellsworth and their partner Tania Katan walked a twenty-mile half circle from downtown Phoenix, Arizona, to Mesa’s LDS Temple in protest of opposition to same-sex marriage. The performance and protest became a vehicle to connect to their environment and to transcend the political and religious circumstances inhibiting their relationship.

Current Seen allows artists, curators, and writers the space and time to examine what is being made in Rochester right now, and to consider issues impacting the city such as displacement, development, and gentrification while glimpsing what is yet to materialize. Art has been deployed to great effect throughout most venues, but the center of gravity still pulls viewers and participants into traditional, white-walled gallery spaces. Additionally, and unfortunately, much of the public art suffers from the “blink-and-you’ll-miss-it” side-effects typical of a biennial, especially for non-locals; future iterations would better serve artists working in the public sphere by anchoring their works to Core or Framework Venues. Another issue that nips at the engagement around Current Seen and the art therein is the issue of navigation. This small venue biennial would be better delivered through a more dense concentration of exhibition spaces and public art. Centralizing exhibition locations and public art would encourage more interdynamic and organic forms of audience participation and significantly lessen audience reliance on the one-part map, one-part biennial catalogue East to West Guide, available at RoCo.

On the whole, Current Seen is an engaging snapshot of this current moment, but there remains little connective tissue, beyond the reflection on contemporaneity and location, from venue to venue and less still between the venues and public art. These issues can be avoided in future iterations through a singular, top-down curatorial vision, perhaps chafing against the egalitarian intent propelling Current Seen.

Looking forward, the cultural future of Rochester remains promising, with Current Seen offering up an embarrassment of artists, curators, and writers to be taken in and discovered by all audiences. Future iterations of this biennial promise to be more deeply engrossing—with a bit of fine tuning, of course. 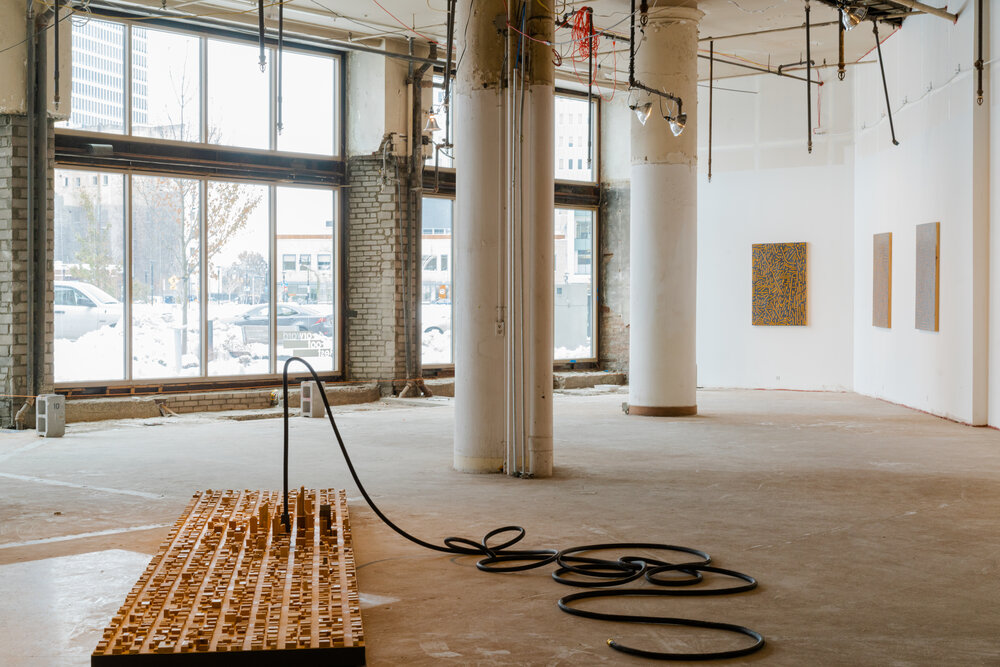 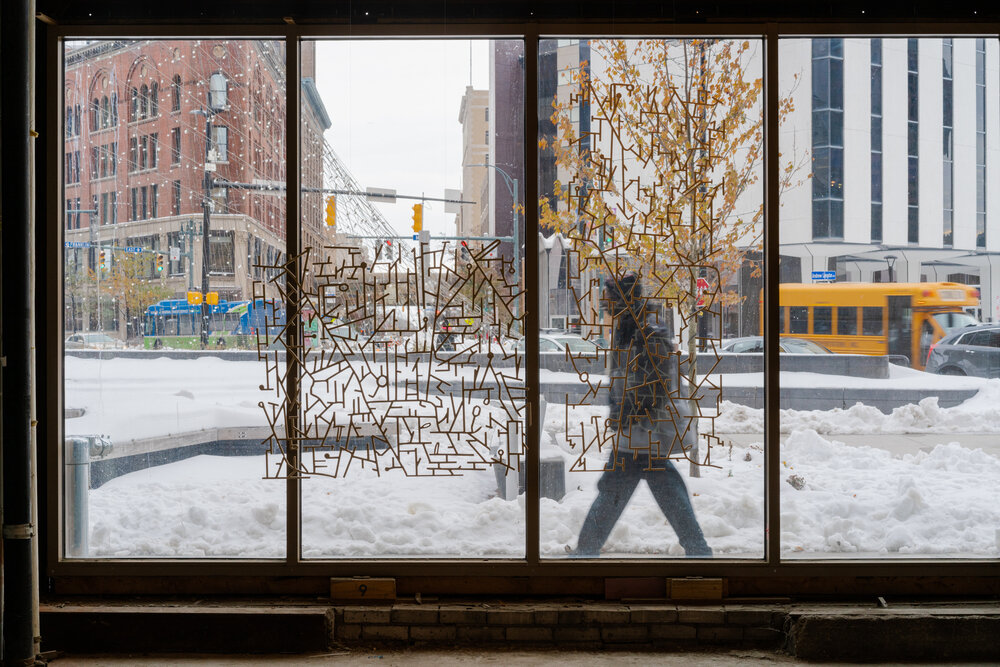 Dana Tyrrell is an artist, curator, and writer from Buffalo, New York. He is currently the Marketing and Development Coordinator for Buffalo Arts Studio.